9 of the Bright and Beautiful Yellow Flowering Shrubs

Yellow flowering shrubs are unquestionably pretty that are able to create a different appearance and a much cheerful or more positive vibe to any surroundings. To add more vibrance to your probably all-green garden or your home landscape, plants that bloom yellow flowers are a great idea.

Many yellow flowering shrub plants begin opening in spring and summer seasons. These are usually in the months of March to April. However, some may bloom as early as February or late as fall. No matter when or how many times they produce flowers, yellow colored ones are surely pleasing to the eyes.

Let’s take a look of the different yellow flowering shrubs you may want to consider.

Azaleas are one of the popular pretty spreading flowers anyone can easily grow. But if you are looking for something yellow, the Golden Oriole Azalea should be on the list. This is not totally bright yellow as it has the lemon or orange like fusion with some white tinges, but can still create a jaw-dropping effect in their blossom. Rhododendron x Narcissiflora is the most yellow among the variants of this species. Regardless, azaleas are generally good flowers because of their sweet fragrance.

On average, azaleas grow as high as 6 feet to 10 feet. They best thrive in zones 5 to 9 with moist, well-drained and acidic soil. They also require an adequate amount of water and partial sunlight exposure. 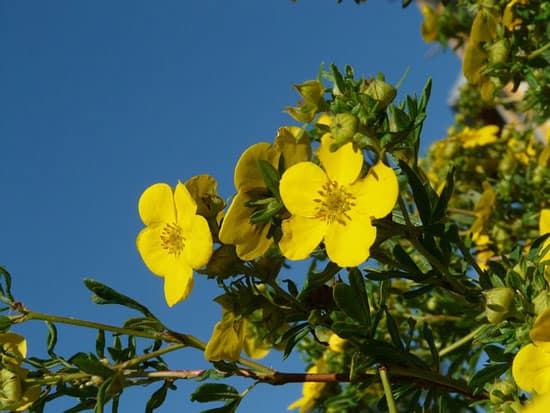 Bush Cinquefoil is different from the common Potentilla, but this is among the popularly grown yellow flowering shrubs by gardeners. In fact, it’s been commonly used as part of the landscape of residential homes.

This flowering plant grows as tall as 4 feet. The soil condition must be moist and well drained. It grows well in zones 2 to 6 based on USDA. For abundant growth and blossom, ensure to plant in areas with full sunlight.

The flowers of Camellia differ in colors, while the yellow variant is blended with white. They may be yellow pale looking but they are pretty and nice. The overlapping petals with ripples make the inflorescence eye-catching, which can also be mistaken as rose.

This type of flowering shrub is warm-hardy. It is suitable to grow this in areas with classification of zones 8 to 10, particularly evenly moist, well drained soil. Therefore, they can be easily cultivated in tropical and warm climate regions, such as Southeast Asia and South America. 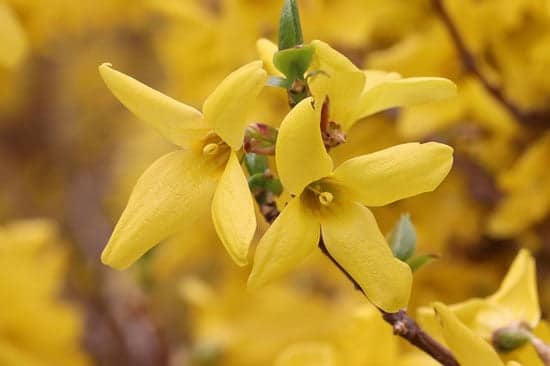 Forsythia is legitimately among the best choices of yellow flowering shrubs. One of its symbols is cheerfulness due to the brightness of its inflorescence. It is also a common plant due to its multiple, long woody branches and all-yellow flowers that bloom in early spring. As a matter of fact, the blossom of this plant’s flowers indicates the end of winter and springtime has arrived.

This perennial flowering plant is able to tolerate drought and poor soil. It suggests that growing this shrub is as easy as you may not think. Little maintenance is required but pruning may be regular to keep it look tidy and not over branched. Furthermore, zones 4 to 8 are the best growing areas. 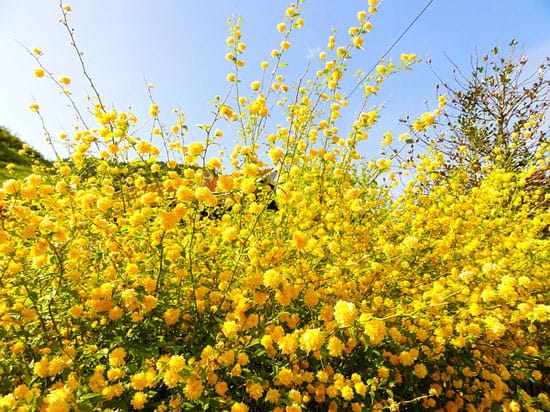 The inflorescence of Japanese Rose in the spring (and later re-bloom in summer) provides a whimsical view like a scene in a romantic movie. It certainly enhances beauty to a landscape or garden for about 6 weeks long. In addition to its vibrant yellow flowers, this shrub’s leaves are bright green.

This type of flowering shrub does look like the common roses but not botanically the same. It is a member of a large rose family, but does not belong to the genus called Rosa. There are two variants of this, single flowered and double flowered. Both need moist, well-drained and loamy soil with partial sun. It grows well in zones 4 to 9. 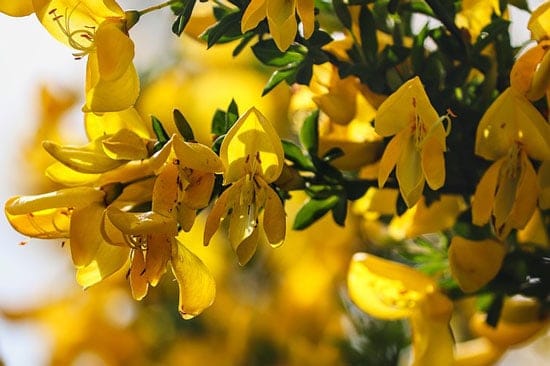 Commonly cultivated in zones 5 to 9, Lydian Broom is also one of the good choices among yellow flowering shrubs for gardeners and homeowners. It requires little care and maintenance. It grows easily in poor soils, which include sandy areas. However, it needs sharp drainage because sandy soil tends to drain fast. Another option is to pour enough water. When it matures, this can grow as high as 2 feet and reach up to 3 or 4 feet wide.

One of the common names for Genista lydia is Lydian broom. Indeed, the plant will remind gardeners of the better-known Scotch broom (Cytisus scoparius). Both are invasive in some regions. 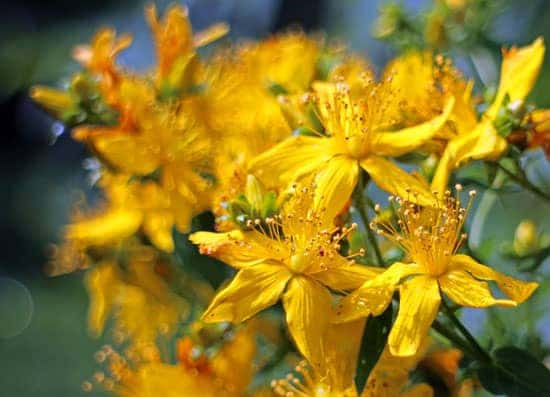 The flowers are smaller than most shrubs but a single stem consists of many heads making the inflorescence eye-catching creating a beautiful view. They usually have five petals with numerous stamens, some can be up to 200. Each head is formed from four to five fascicles.

Moreover, It’s a genus of flowering, low-maintenance perennial plants in the Hypericaceae family. This plant grows best in zones 5 to 9. It reaches from 2 feet to 4 feet high, typically with the same measurement in width. It requires moist, well-drained as well as sandy and rocky soils. For better growth and abundant blossom, it must be exposed to partially or full sunlight.

St. John's Wort symbolizes rebirth and protection. During the early pre-Christian era in England, this was used for divination purposes. It’s believed to have connection with the sun due to its bright golden yellow color. 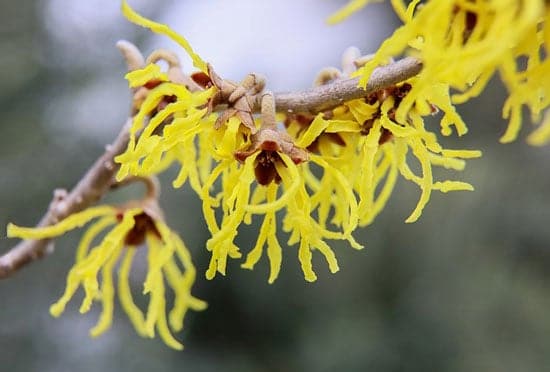 Like St. John's Wort, Witch Hazel is another plant that serves as a herbal remedy and supplement. And of course, it is a yellow flowering shrub. The flowers are unique in shape with a bizarre spider-like look. The heads are small with spiky petals that cover the reddish brown ball-shaped central part.

This shrub grows in zones 5 to 8, It needs acidic, well-drained soil with partial to full sunlight. It can tolerate heat. 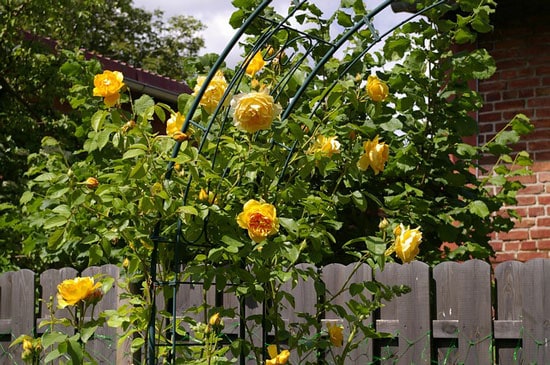 In all the yellow flowering shrubs, Yellow Rose is probably the most symbolic associated with the color yellow. This is known to represent joy and friendship.

Yellow Roses may not be as common as the red and white ones, but there’s no denial how beautiful this is when given as a gift to someone special or to celebrate an occasion. Its lovely fragrance is another reason of why this flower makes a good treat. It does beautify a garden or even a small part of your patio and sidewalks.

This variant can grow from 4 to 6 feet in average height. It thrives productively in zones 6 to 10. The soil type required must be fertile and moist, well drained.

Like in most traditional care of roses, cutting the flowers including the dead ones is a key solution for better re-bloom. This is a good avenue for extra income since roses, regardless of color, are still among the favorite and popular flower choices ordered in floral shops and local markets.

These yellow flowering shrubs are a perfect choice to add vibrance and contrast the green color of leaves and grass on any garden or landscape. Each of these plants listed above is easy to nourish and inexpensive to care.

To maximize the yellow color or maintain the brightness of the flowers, it is best to give them the recommended amount of sunlight and water. The level of sun exposure is an imperative factor to their vibrant blooms.

What makes shrubs a good consideration is the option that you can control their size and shape. A little pruning of twigs or branches and cutting of leaves depending on your personal preference are the only things you can do in addition to the basic care necessary.

Remember that before the spring ends, this is the best time to prune. It’s when the leaves are full. However, you may also do some pruning in the summer season just right before the plants leaf out.

What other extra measure do you apply in taking good care of your flowering shrub plants?

10 of the Pretty Star-Shaped Flowers You Can Grow

29 of the Pretty Pink Perennials for Garden You Can Grow

20 of the Brightest Orange Perennial Flowers

Learn How To Revive A Fuchsia Plant In 10 Easy Steps

What are the Best Full Sun Annual Flowers

23 of the Top Garden Plants with Large Flowers