Variety is The Spice of Life

Rose, tulips, and chrysanthemums undoubtedly bring a level of magnificence to your garden. These blooms are rather popular though so they will be present in many gardens and found on many a bouquet. Their ubiquity has somehow diminished their grandeur and has them close to becoming clichés. That would be a sad day. People often forget that there are thousands of flowering plants that are equally beautiful, even more so for being uncommon and unique. Take these flowers that start with I for example.

Imagine a delightfulposy of Iris and Illinium. Their one of a kind beauty and meaningful symbolisms will make them great additions to a master gardener’s diverse collection of blooming plants. Additionally, wise gardeners or florists know that the loveliness of flowers is not just in their grand nature (with tulips, for example) but also in their variety.

Unique flowers for the unique individual. Here are four exotic flowers that start with I. 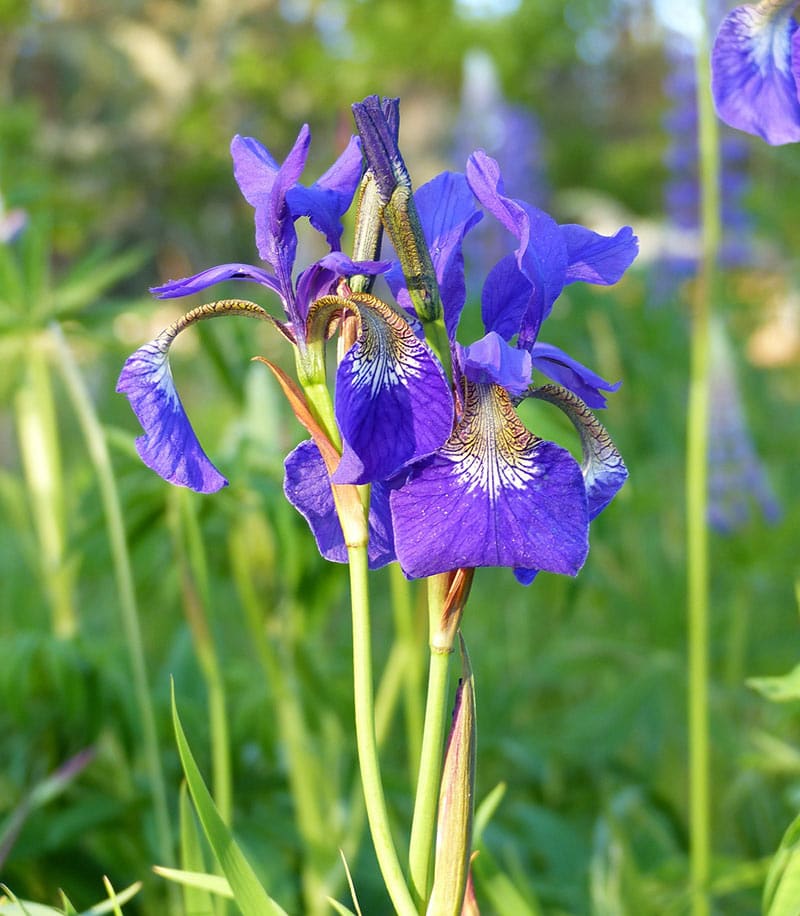 The Iris takes its name from the beautiful Greek goddess of the same name who personified the rainbow. Like its divine namesake, the iris seems to take cues from the rainbow as it blooms in a wide range of colors. It desires no worship,though since it is a hardy and reliable perennial that does not demand much for growth.

The stately blooms of the Iris appropriately represent royalty, refinement, hope, and wisdom. 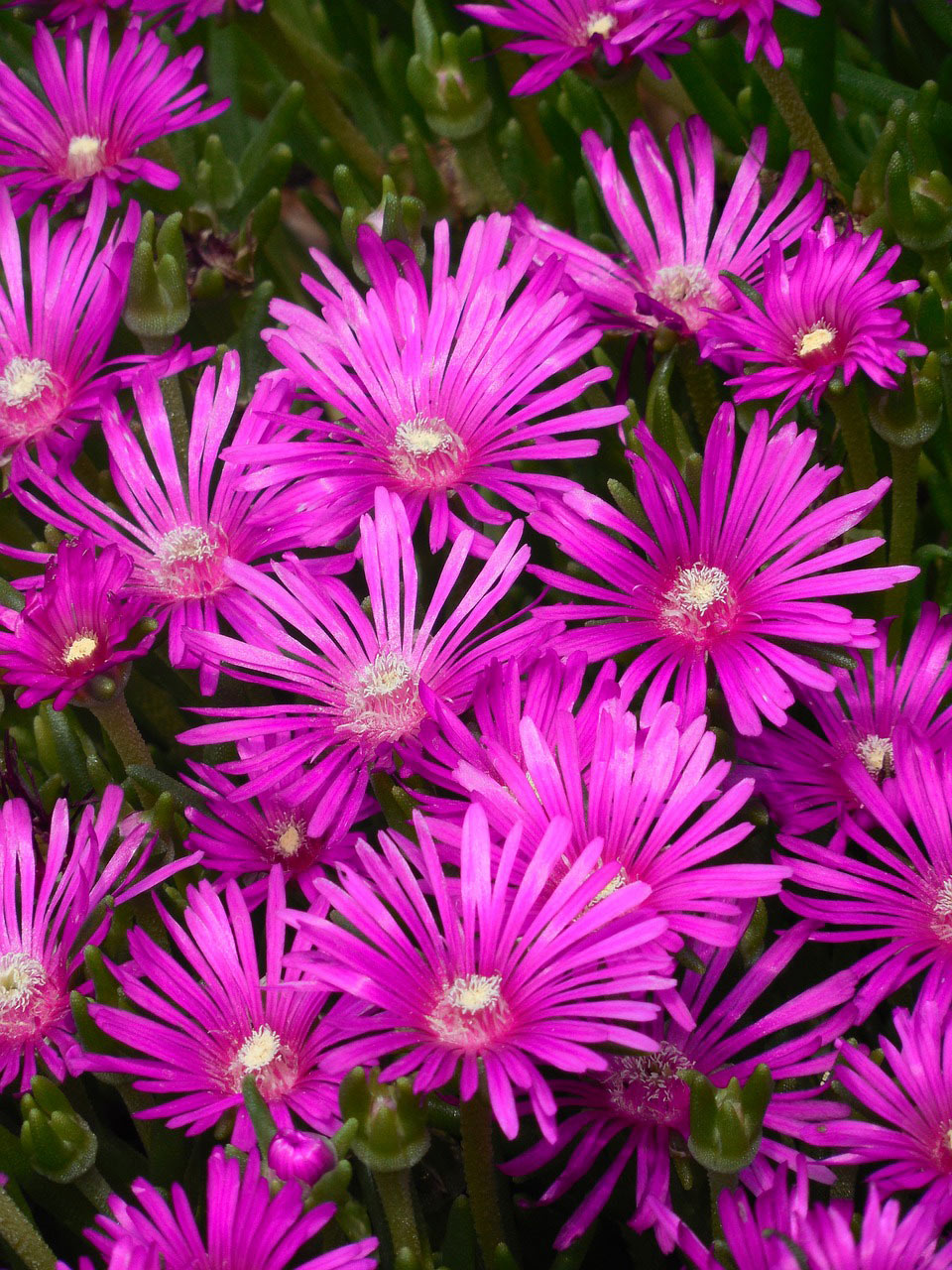 Another undemanding yet fulfilling flowering plant is the Delosperma, or Iceplant as it is more commonly known. These hardy perennial takes a lot of ground as its foliage spreads and grows, forming a dark green carpet. You are then blissfully rewarded when its intensely-colored flowers bloom en masse, transforming the green carpet of leaves into a sea of scarlet, lavender, and ochre blossoms!

This ever-blooming evergreen rightly represents hope despite tragedy, and positivity despite the occasional droughts of life.

Here’s a video showcasing the natural beauty of the Iceplant: 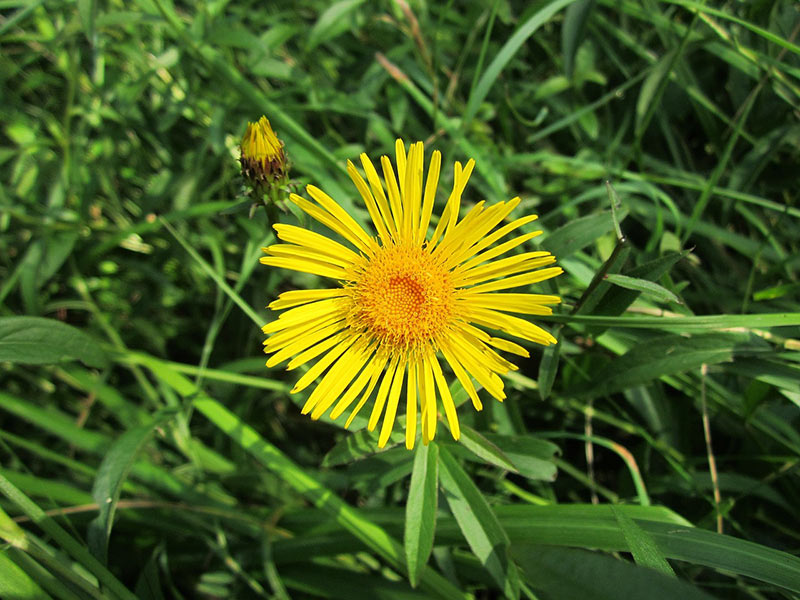 The Inula helenium, otherwise known as elecampane, is a summer flowering perennial that blooms bright yellow flowers in what seems like immature sunflowers. This ancient plant has a long history of practical use. For instance, the ancient Romans would use the plant in medicinal and culinary applications. Furthermore, the Inula is popular as a preservative, venom antidote, perfume, and preservative respectively in China, Slovenia, Japan, and Europe.

Due to its traditional use in herbal and secular medicine, the elecampane has always been symbolic of good health, wellness, and healing. 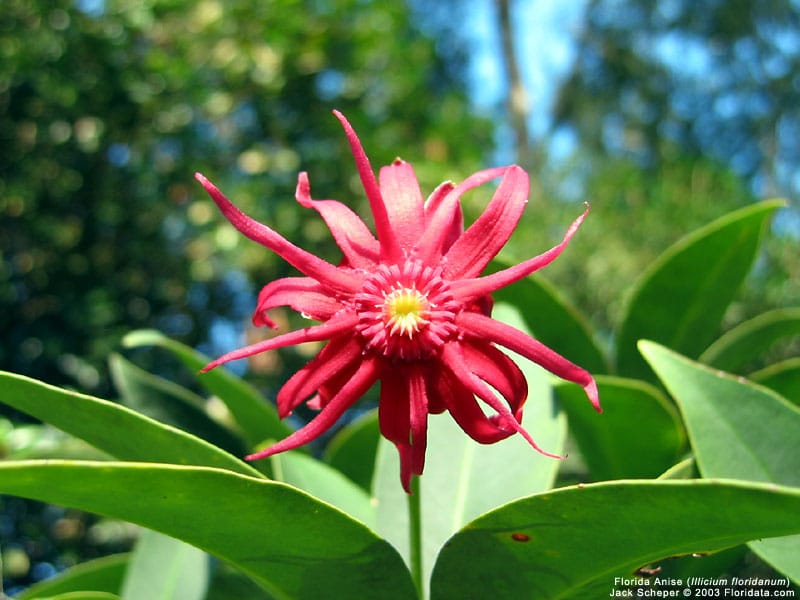 A few flowers encapsulate the metaphor of a flower explosion than the Illicium floridanum, or Florida Anise. When its seeds are ripe, they explode out, quite literally, from the blooms! The Florida Anise’s small but attractive maroon blossoms are both a sight to see and odor to smell as the star-shaped flowers emit an anise-like odor reminiscent of the kitchen spice. Take care though that you do not substitute these wild spice for the actual Staranise (Illicium verum) as the Florida Anise is toxic!

Illiciums represent the beauty that you see beneath the façade or the hidden wonder things. 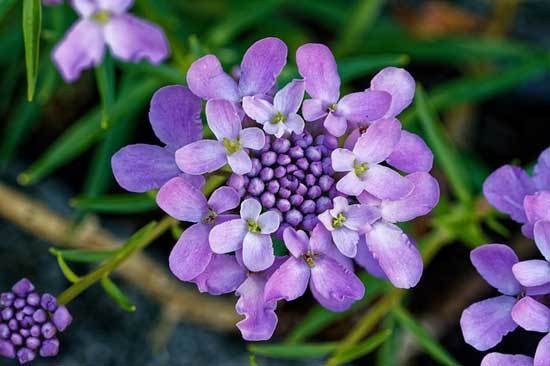 Iberis, which is most popularly known as Candytuft as well as Evergreen Candytuft, is a white flower producing foliage that can tolerate full to partial sun shade and dry conditions. It is native to the southern parts of Europe. Regardless, it can grow with an average height of 0.5 feet or 6 inches to 8 inches. A single foliage can spread up to almost 3 feet wide.

This perennial plant is an early spring bloomer starting in the month of April. Trimming about 2 to 3 leaves once the flowers are about to die can encourage a re-bloom. It brings a very beautiful white (sometimes a little greenish) convex or flat-topped shaped floral heads on a corymb-like inflorescence.

The arrangement of the flowers and widespread foliage makes Iberis an attractive and charming plant to any home landscape and garden. It has a welcoming look that certainly creates additional beauty to the surrounding.

This flowering plant has a few representations. It signifies beauty, sweetness, and indifference. 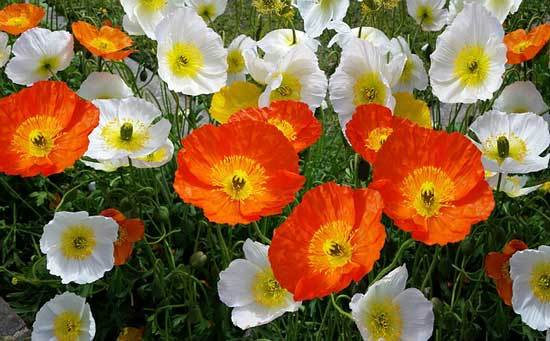 Iceland Poppy is a colorful and beautiful flowering plant that typically blooms around May to July. The four petals look papery. It has a bowl-like shape with a slight to little fragrance. It comes out in an array of colors, and among the common shades are yellow, orange, red, pink and white. This is often grown as biennial but the hardy ones can be short-lived perennial.

This pretty flower producing plant is native to different regions around the world, which include Asia, Europe, Arctic regions, and North America.

The etymology is based on the Latin epithet “nudicaule”, which means “with bare or naked stems”. Belonging to the poppy family Papaveraceae, this plant is also known by another name, Arctic Poppy.

Generally, all poppies are associated with several symbols, such as peace, sleep and death. 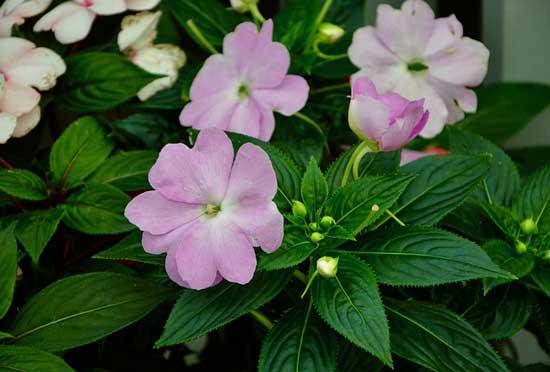 Busy Lizzie is the most common English name of Impatiens. It also has nicknames, such as Bizzy-Lizzie, Japanese Balsam, Shady Lady, Patient Lucy, Touch-Me-Not, and Jewel Weed. This is native to Africa, particularly the eastern parts. Called as “sleeper weed”, this is now considered as environmental weed in New South Wales and Queensland in Australia.

This herbaceous, perennial plant grows from 30 centimeters to around 3 feet. It has fleshy stems, long stalks, and glossy green leaves. The egg-shaped or oval floral heads, consisting of five petals, bloom in different shades, such as pink, red, violet, and white.

It has the traditional symbol of motherly love. 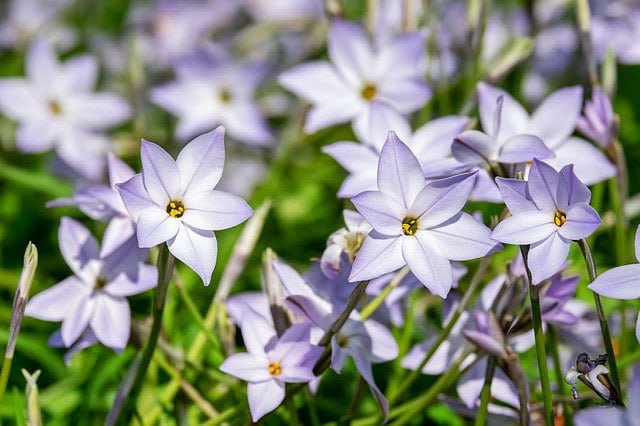 Starflower is the popular name of Ipheion Uniflorum. Also known as Spring Starflower and Springstar, this belongs to the Amaryllis family, which is related to onions. This is native to Uruguay and Argentina. Nowadays, this can grow in cultivated regions, which include Australia, New Zealand, France and Great Britain.

It is a grasslike herbaceous perennial bulb plant with a scent similar to onion but more of a honey fragrance. It grows up to 1 foot long with a foliage of about 3 feet wide. The stems can reach up to 8 inches and produce beautiful star-shaped flowers. Each floral head features six pointed lobes. Most of the species are white to deep purple flowers.

Its scientific name “uniflorum” is a Latin word that means “single flower”. This is due to the fact that each stem produces a single flower. 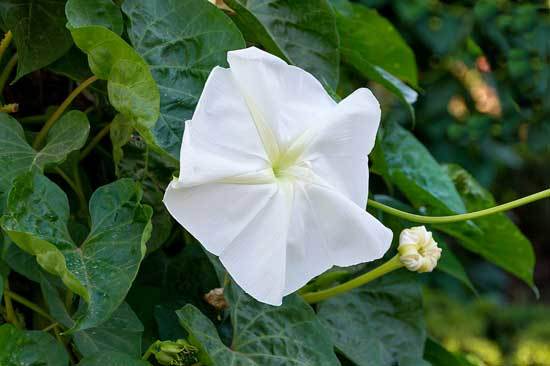 Ipomoea Alba is most popularly known as Moonflower, which is a type of vine. Actually, there are other names referred to this, including Tropical White Morning Glory, Giant Moonflower, Moon Vine and Evening Glory.

Species of this plant are climbers and perennials. They thrive in moist forests, watercourses, disturbed and riparian areas, and urban bushlands. Thus, a very popular plant in subtropical and tropical countries, which include Australia.

The hairless, aerial climbing stems are composed of heart-shaped leaves. Flowers are tubular or trumpet-shaped in greenish white color. Each flower has white stamens and five, small sepals with pointed tips.

Its name is given as is because the flowers open during nighttime and wither at an early time of the next morning. Moreover, this has a symbol of “blossoming in dark times”. It signifies growth potential of the soul and personality. Thus, a good reminder of hope and better tomorrow that anyone can hold on to during such difficult and challenging periods in life. 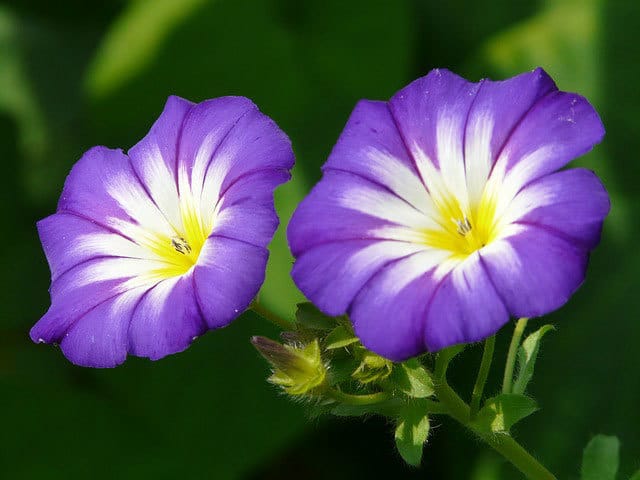 Ipomea Tricolor is a very beautiful flowering plant. It is most known by its name Morning Glory, also called Grannyvine and “Heavenly Blue”. It has a distinctive color and feature through its magical or galaxy-like blue color. Some have a white and bluish purple striped color, while others are deep violet.

Morning Glory is a genus of flowering plant in the Convolvulaceae family, which is native to the New World tropics. It is presently cultivated and naturalised around the world as long as the soil condition is well-drained and sandy, clay, or loamy. This is classified as herbaceous perennial or annual.

A mature plant of this grows from 7 feet to 13 feet high. It has spirally arranged leaves and trumpet-shaped flowers. It is very attractive with its bright blue petals with white or golden yellow central throat, wherein a few stamens are found.

What’s also fascinating about this plant is that its flower color changes during the blooming period. It can shift from blue to red or deep crimson.

The flowers bloom in the morning and close in the afternoon, which is why it’s called the Morning Glory. It does re-bloom every morning throughout its season - July to October.

These are flowers that start with the letter I that should be taken into consideration when adding new plants to your garden. Have you found which ones are most suitable to your area based on soil condition and weather?Enter your text here...

How To Revive St. Augustine Grass?

Top Ways to Craft a Brew of Your Own

How To Get Rid Of Onion Grass?

How Long Do Orchid Blooms Last?

How Long Do Orchid Blooms Last?
How Often To Water Poinsettias?
Yellow Perennials – 10 of the Most Beautiful Sun-Colored Flowers
Growing Winter Flowering Annuals – What You Need to Know
10 of the Bright Summer Blooming Perennial Flowers
10 of the Pretty Star-Shaped Flowers You Can Grow