The Flowers That Start With O: 11 Of The Most Astonishing

More than Meets the Eye

Hence, one should never underestimate a plant’s blossom. They are certainly more than meets the eye.

11 Of The Most Astonishing Flowers 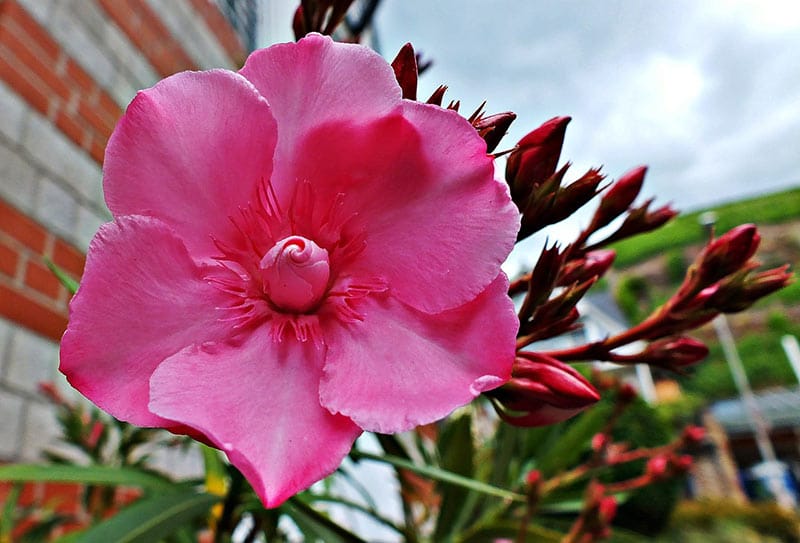 The Oleander plant is a great natural windbreaker, in addition to its tolerance of poor conditions, which is why it is a favorite in parks, gardens, and roadsides. What makes this plant astonishing, however, is its showy blossoms of red, pink, and white, and yellow that look, interestingly, like roses. Don’t be fooled, though. As roses may have thorns, the Oleander has poison in its proverbial veins, and it’s highly toxic to both humans and animals.

Due to its hardiness and toxicity, the oleander has come to symbolize power, endurance, and a spirit that never gives up in spite of hardship. 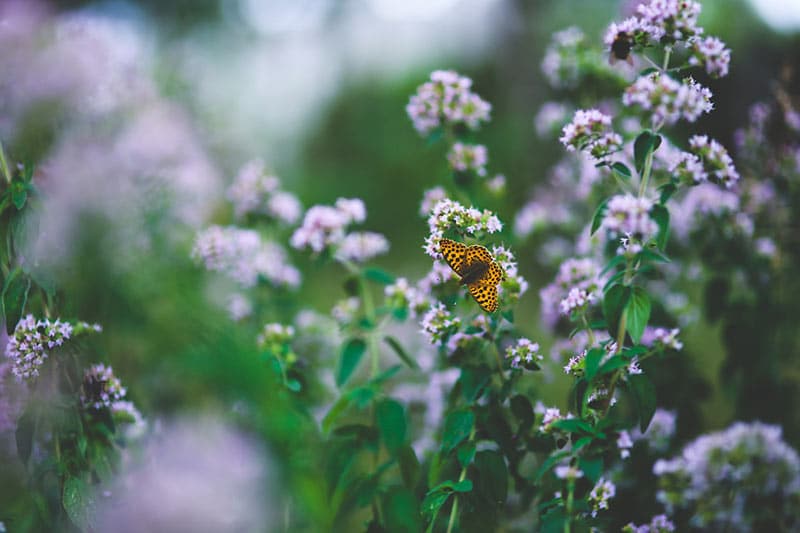 You may know Oregano as the pungent and minty herb redolent in Italian and Mediterranean dishes. One cannot ignore, however, the naturally-occurring bouquets of pink and purple oregano blossoms during summer! These blooms grow in profusion and will add to the sweetness of an already fragrant plant.

Oregano, due to its medicinal properties, represent healing and well-being. 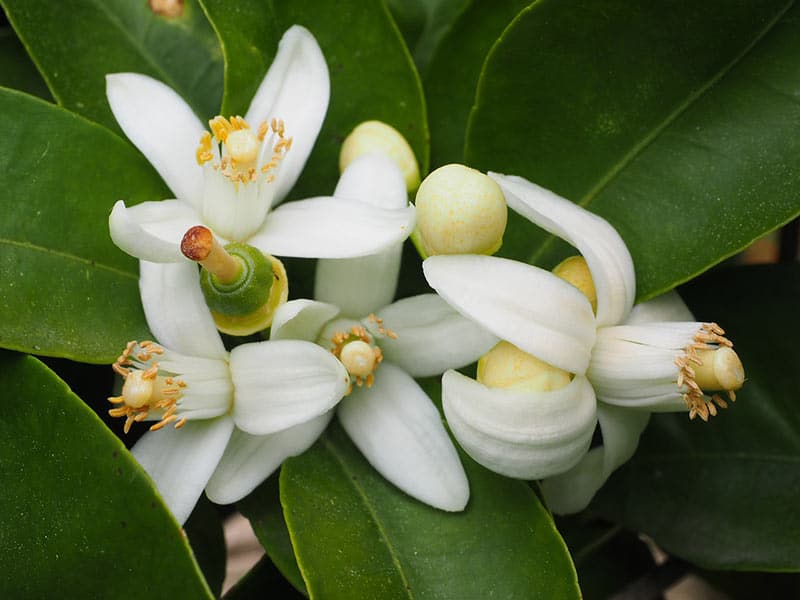 Another bloom that you may overlook is the flowers of the orange tree. It’s bright and much-loved fruit seems to grab all the attention away from this humble-looking bloom. And yet, what the orange blossoms lack in looks, it makes up for in fragrance and its many applications. These blooms are incredibly fragrant, significant in perfumery, and a favorite for teas!

People, through the ages, associate the fragrant blossoms of the orange tree with happiness and good fortune. 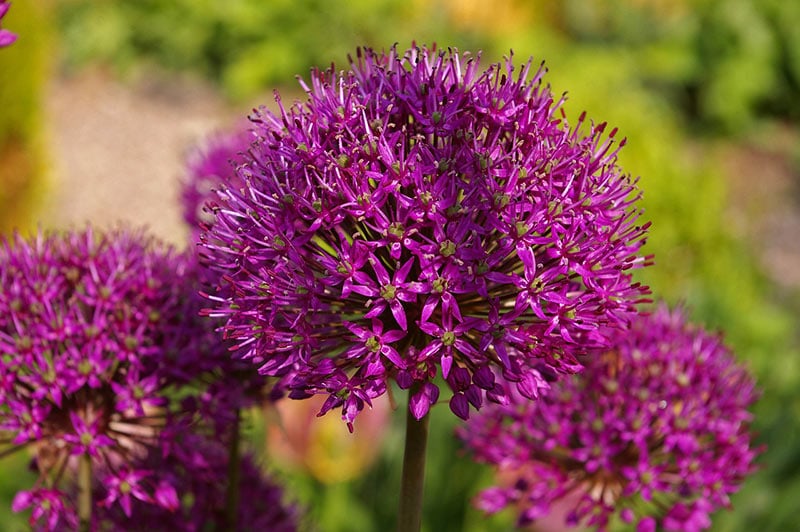 Onions may be the last plant on your mind when you think of astonishing flowers. The Allium giganteum will prove you wrong, though. These ornamental onions blossom globe-shaped inflorescences in purple, mauve and lilac colors! This Allium’s usefulness and prestige earn it the Award of Garden Merit (AGM) from the Royal Horticultural Society.

The Ornamental Onion’s globe of flower clusters a potent symbol of royalty and courage. 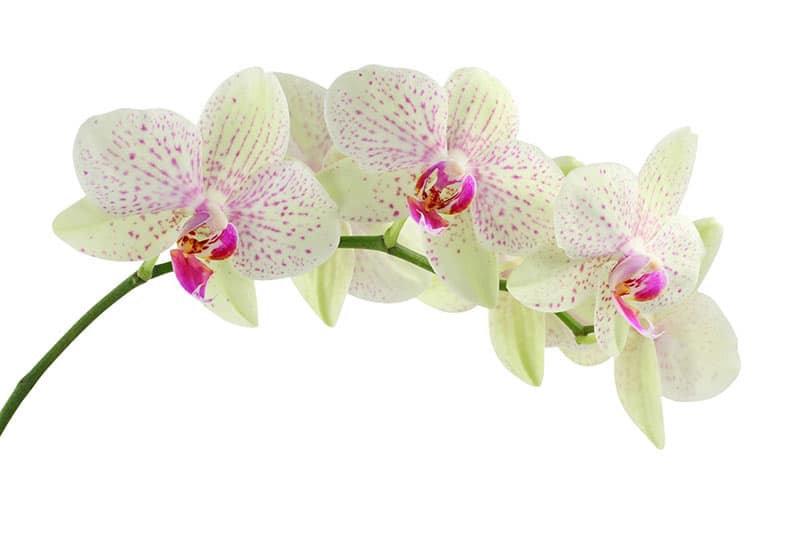 Orchids are, arguably, one of the most beautiful, sought-after, and prized flowers in the world. Their magnificent blooms are so unique and distinct that you can easily pick them out from a group of plants. Also, the orchid’s fragile and exacting nature only add to its loveliness. These unique qualities are the reason for the Orchid’s representation of extreme but delicate beauty or love that comes only once in a lifetime.

Most importantly, for our fifth flower that start with O, we’ll feature five different varieties of the beautiful orchid family! 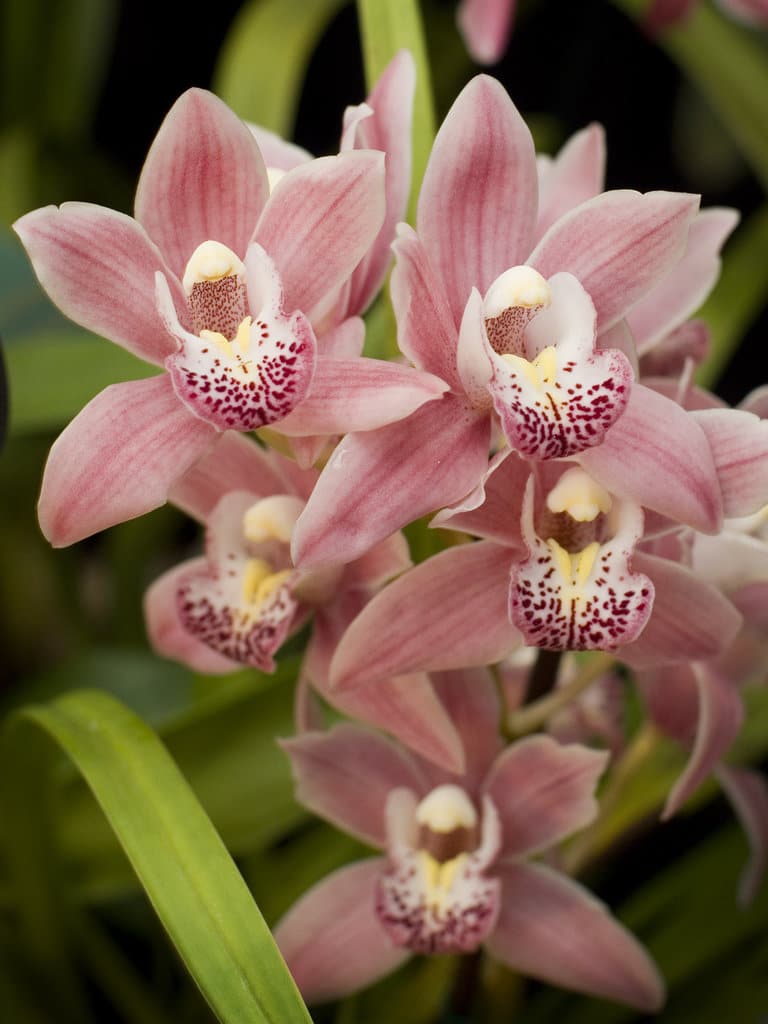 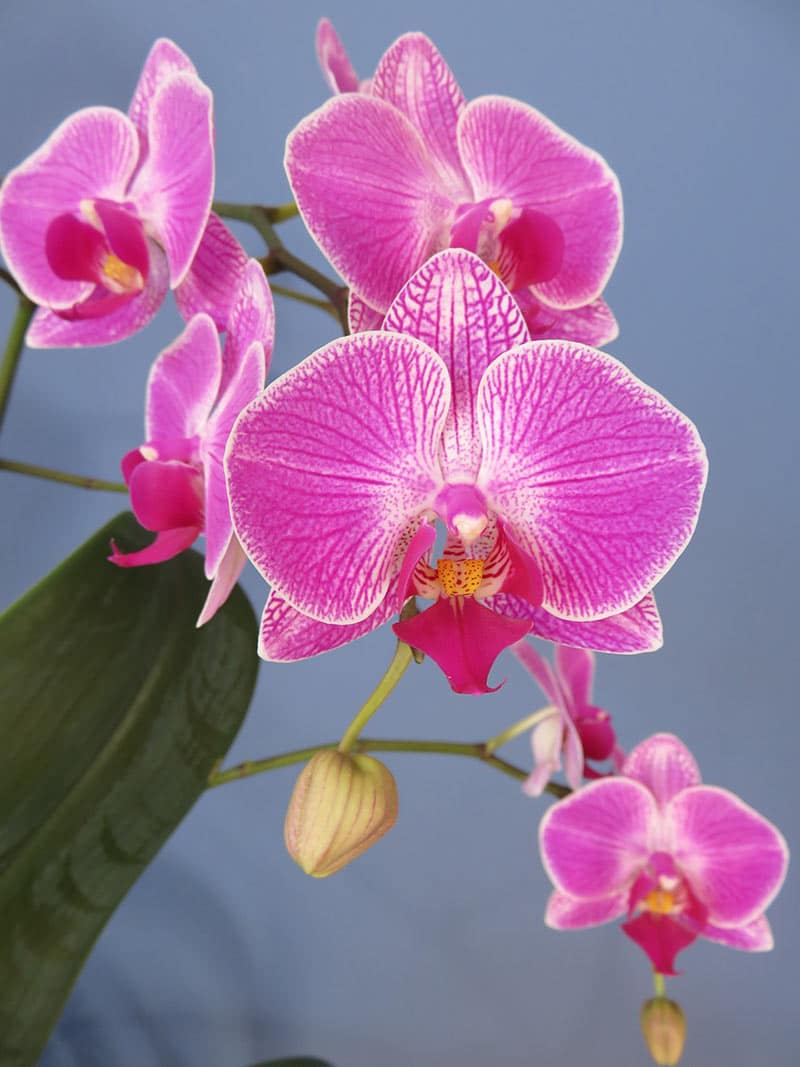 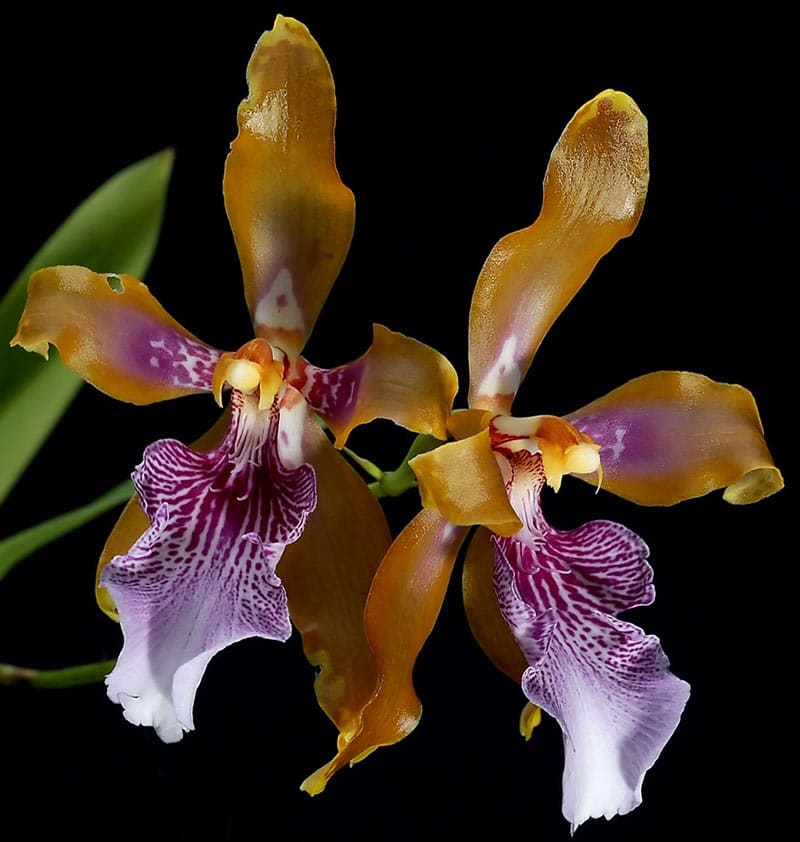 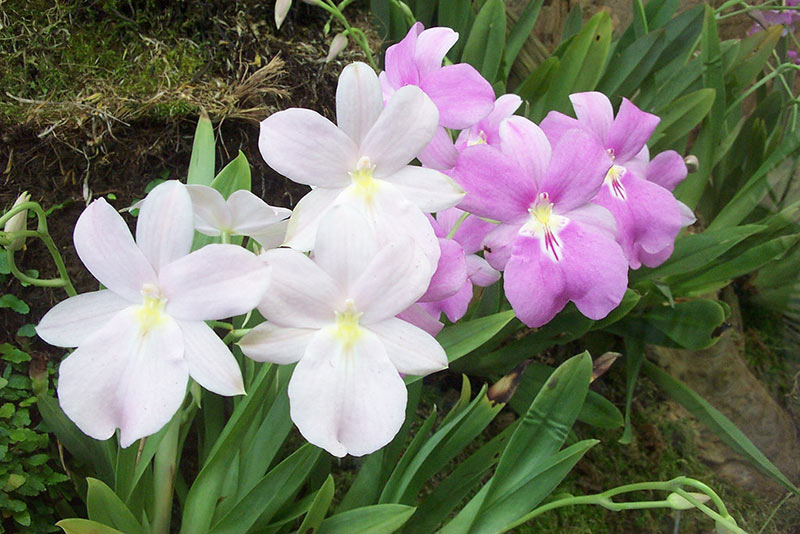 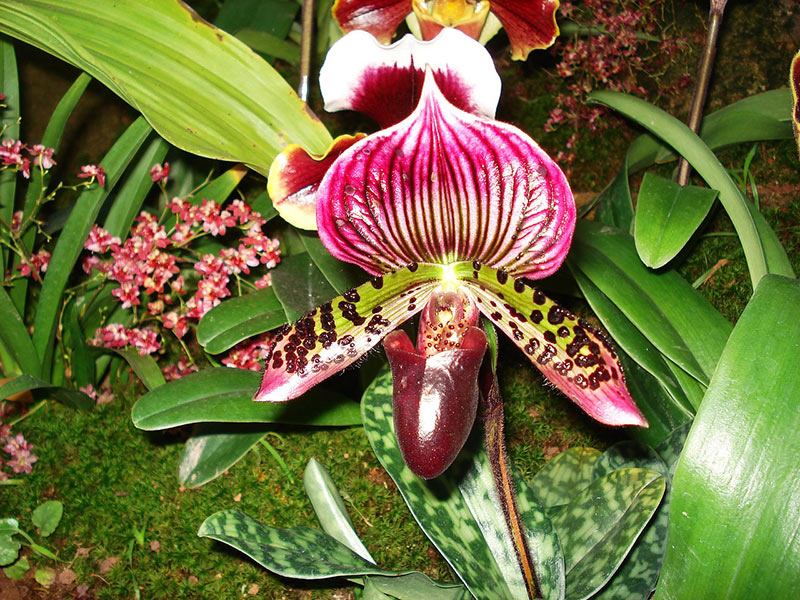 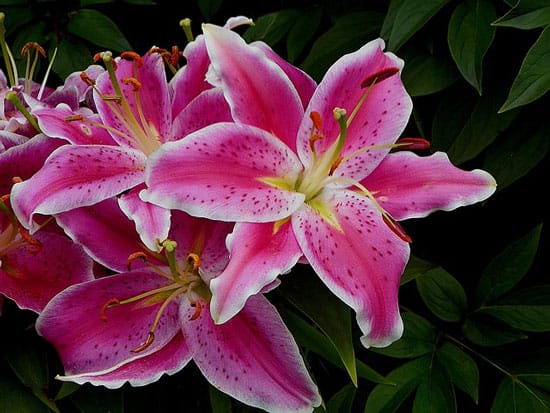 Oriental Lily, which is most commonly known by the name Stargazer, or Stargazer Lily, is an attractive flowering plant. It is popular with its large, beautiful and sweet scented flowers. This is among the favourite cut flowers for special occasion bouquets.

Stargazer doesn’t require much care, and is easy to grow and reaches up to 3 feet tall. It thrives well in well-drained and fertile soil (but mulching is recommended to prevent drying the soil out) in partial to full sun shade. It produces eye-catching flowers throughout July and August. A single stem consists 2 to 8 flower heads. In addition to its huge size, the petals are ruffled with interesting details from deep fuschia to light pink colors with dark pink speckles.

Its genus name Lilium is derived from the Greek word “leiron”, which refers to the first word flower White Madonna Lily. This flower symbolizes innocence of the soul. 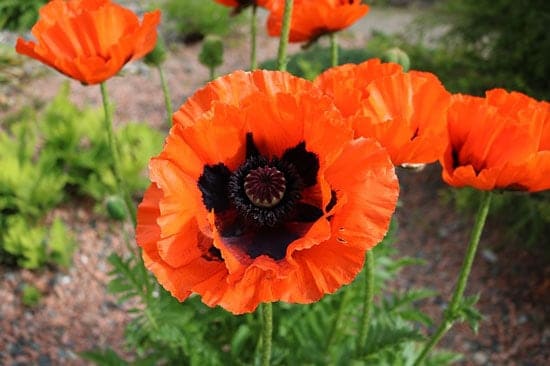 Beautiful and inviting, Oriental Poppy or Papaver is a frost-tolerant flowering plant that is native to northern Iran, northeastern Turkey, and the Caucasus. There are also species that thrive in cold cold and temperate regions of Europe, Asia, North America and Africa. This genus has about 70 to 100 species.

Oriental Poppy flower is composed of two sepals, which fall off once the bud opens. Its petals can form from 4 to 6 in red as the most common color, but others are pink, orange, lilac and yellow. The stamens are formed in whorls around a compound pistil, due to fused carpels, and stigmas are present in which its number corresponds to the number of carpels. 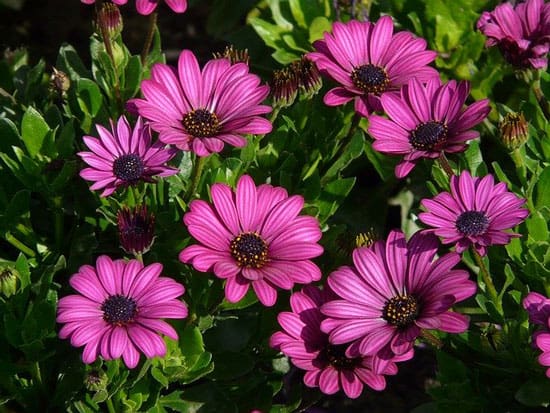 Cape Daisy is a more common name referred to Osteospermum. Other names are Blue-Eyed Daisy, African Daisy, and South African Daisy. It belongs to the Calendula family Calenduleae, which is a smaller tribe of the daisy and sunflower family known as Asteraceae. Hence, it is known as African daisy and daisy bush. This has 35 to 50 species.

This half-hardy perennial subshrub produces daisy like flowers. It has both disc and ray florets. Disc florets come in different colors, which are purple, blue and yellow. Ray florets vary in several shades, which include purple, pink, yellow, cream, mauve and white.

Its name is derived from the Greek word “osteon” or bone and Latin “spermum”, which means seed. This flower symbolizes purity and innocence. 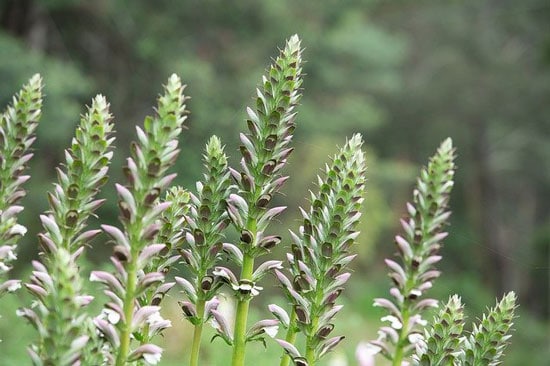 Oyster Plant is a perennial plant that is easy to grow and maintain. It extends an average height of 1 foot to 3 feet. It is well known for its cylindrical spike inflorescence. Each spike can hold as many as 120 tubular flowers that come in lilac, rose and white colors, and are surrounded by 3 purple or green bracts. These bloom during late spring to early summer.

Its genus name is derived from the Greek word “ákanthos”, which means "thorn". Mollis is a Latin word that refers to as "soft and smooth".

This plant is native to Croatia, northwest Africa and Portugal. 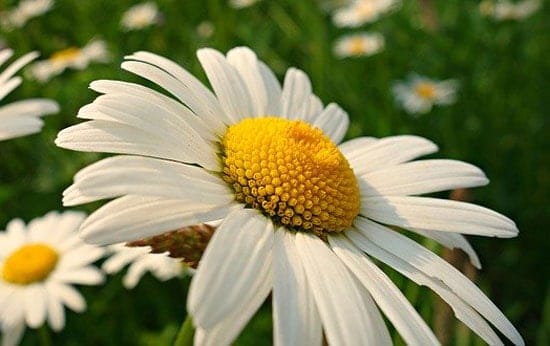 Ox-Eye Daisy is a perennial herb that produces flowers that bear a typical daisy. Its genus name Leucanthemum Vulgare refers to “common white flower”, since it is a white flowering plant. It is also known to other nicknames, which include White Weed, Midsummer Daisy, Button Daisy, Marguerite, Field Daisy, Moon Penny, and Dog Daisy. This is native to Europe and temperate regions in Asia. It also tolerates the weather and soil conditions of Australia, New Zealand and North America.

This plant grows an average height of 1.5 feet to 2 feet. A single head of the flower can form from 15 to 40 white petals with yellow disc florets. It usually blooms at the end of spring season until the whole summer. 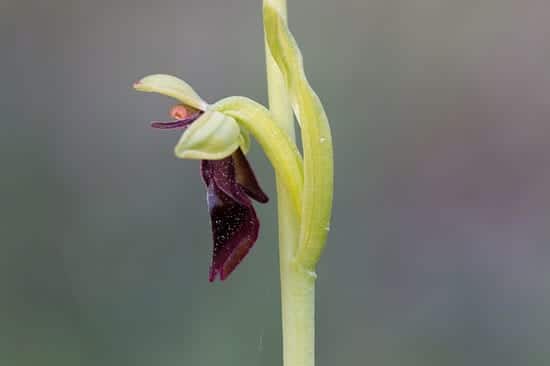 This Europe native orchid presents distinctive and uniquely shaped flowers resembling the insect fly. Hence, it is called Fly Orchid. It can be found in Finland, Scandinavia, Greece, Spain and the Baltic states.

Fly Orchid is a slender, tuberous perennial plant that grows and reaches up to 2 feet tall. From May to July, it blooms an insect looking flower through a spike. Each spike holds a single flower or as many as 10 flowers. It features yellow-green sepals and dark brown to black petals.

Ophrys is a Greek word that means eyebrow. Insectifera is a Latin epithet, which means insect carrying or insect bearing. This is obviously due to the unusual and eye-catching appearance of the flowers.

Many of these flowers that start with O are beautiful and remarkably unique. They vary in sizes, shapes and colors, but can certainly create a dreamy view with their pretty and vibrant florets to any garden.

Which of these flowers that start with O are perfect for your garden? Make sure that the soil and weather conditions are sufficient since these plants have different requirements. Not all flowers can successfully grow and abundantly produce flowers that easy as they need the best elements. Once you know the detailed basic care requirements, it is easier to identify the right flowering plants to consider.

10 of the Cutest, Most Popular Indoor Succulents

29 of the Pretty Pink Perennials for Garden You Can Grow
20 of the Brightest Orange Perennial Flowers
Learn How To Revive A Fuchsia Plant In 10 Easy Steps
18 of the Beautiful Full Sun Container Flowers – How to Grow Them
What are the Best Full Sun Annual Flowers
23 of the Top Garden Plants with Large Flowers
We use cookies to ensure that we give you the best experience on our website. If you continue to use this site we will assume that you are happy with it.Ok