The Flowers That Start With L: 14 Of The Most Breathtaking

Taking Your Breath Away

While winter may represent sleep, spring is definitely for awakening and rebirth as temperatures rise and flora and fauna begin to wake from the deep slumber. Most noteworthy though are the flowers that start with L which enchant you with their blooms, not just in spring but also during the other seasons! Having a variety of these multi-season blooming plants will make sure you always have colorful blooms year-round! 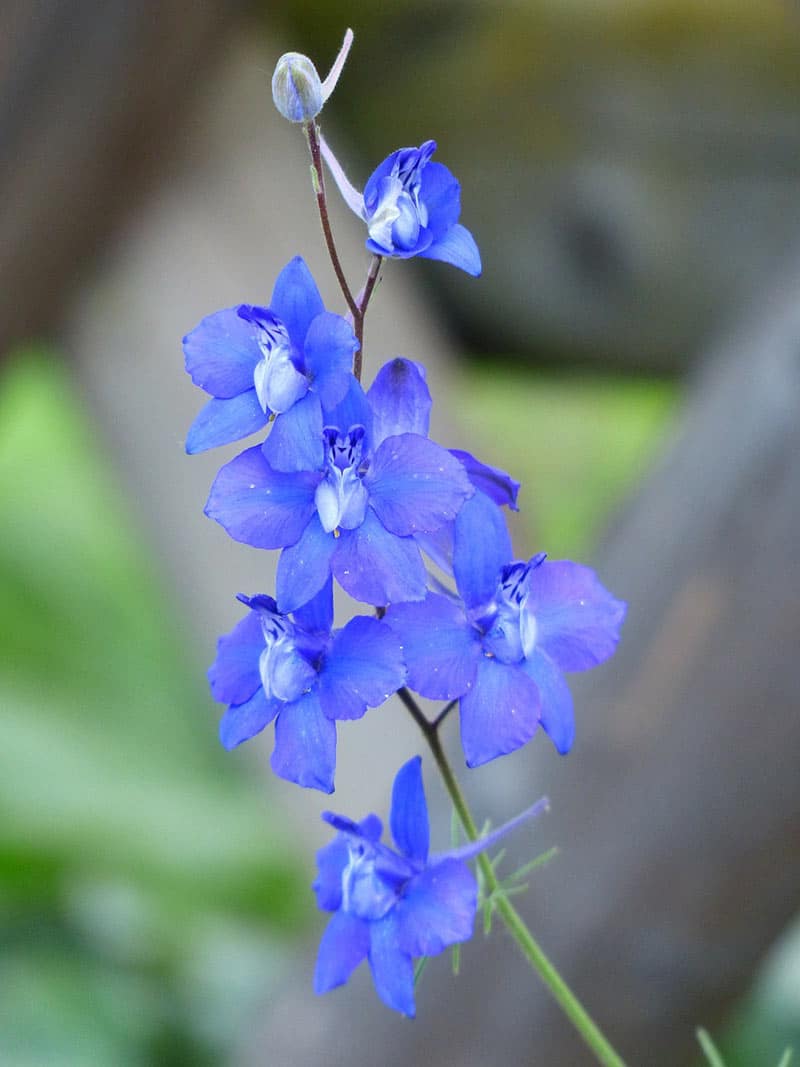 The undemanding indigoes of the larkspur may be reminiscent of the delphinium. The larkspur, however, is an annual plant as opposed to the perennial delphinium.

This lovely summer and spring blooms look best in clusters as they flower colorful shades of blue. 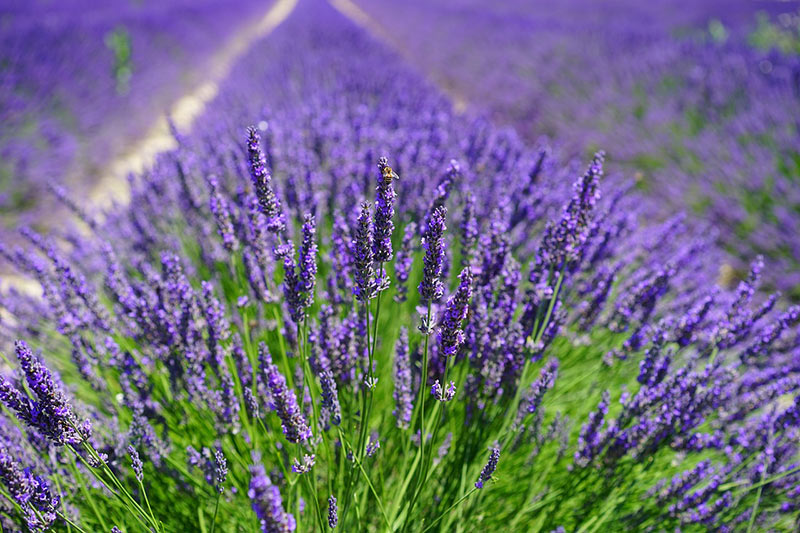 Famous for its namesake blooms and soothing fragrance, lavender blossoms are also popular for their healing properties and many culinary applications. That is, aside from their natural yet exotic beauty.

The multi-faceted lavender evokes the ideas of grace, purity, healing, and serenity. 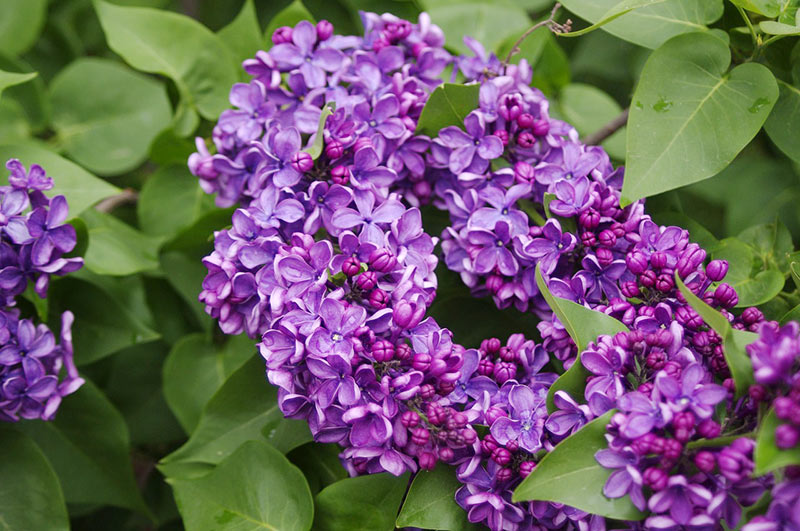 Attract butterflies as well as people with the Lilac’s sweet fragrance emanating from deeply colored blooms. These lovely flowering plants are undemanding and low maintenance, allowing you to tend your other flowers that start with L!

When the expression “love is in the air,” they may have been thinking of the Lilac’s endearing smell. Rightly so, as the plant’s blooms represent innocence, and first loves. 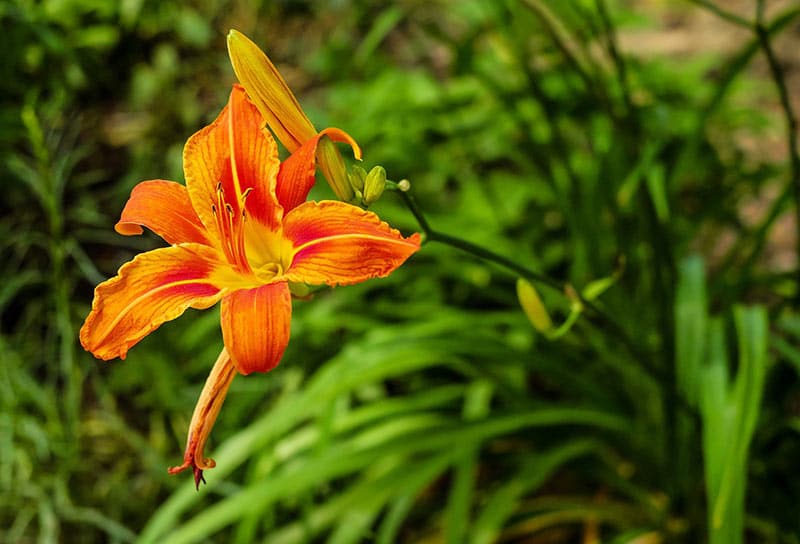 The big beautiful blooms of lilies come in the fiery colors of orange, yellow, pink and white. In addition to looking awesome when cut, this flowering plant is very easy to grow and will give you majestic blooms from the start of spring until late fall!

The lily’s majesty and elegance earns it the qualities of youthful strength and beauty, royalty, fertility, and passion

5. Lily of the Valley 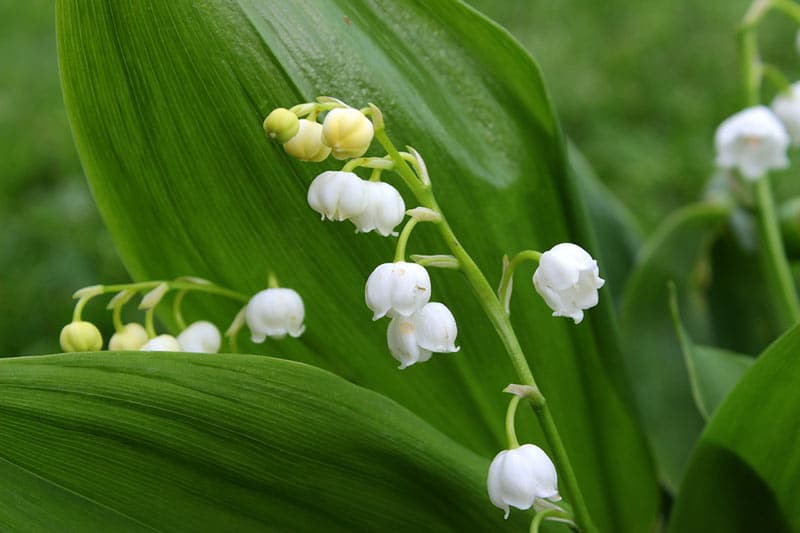 It’s interesting to note that the Lily of the Valley are not lilies at all but are from the same family as asparagus. However, don’t let their delicate blooms and sweet odor fool you, the convallaria blooms can be profoundly poisonous so make sure always to use gloves when handling them.

The small white blooms of the Lily of the Valley symbolize purity, and true love despite adversity. 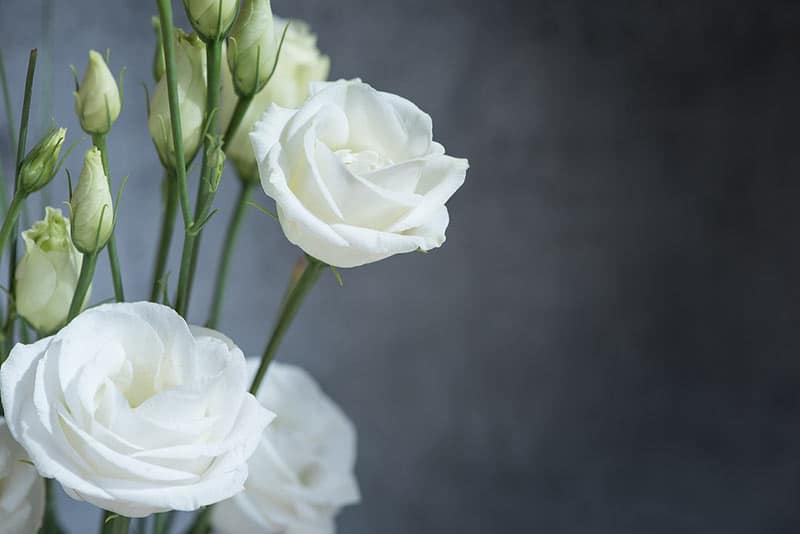 The Lisianthus is famous for its glorious and magnificent blooms of blue, white, and pink. These elegance flowers will keep in a vase for up to 3 weeks!

This beautiful bouquet flower is aptly symbolical of charisma, and deep bonds of love. 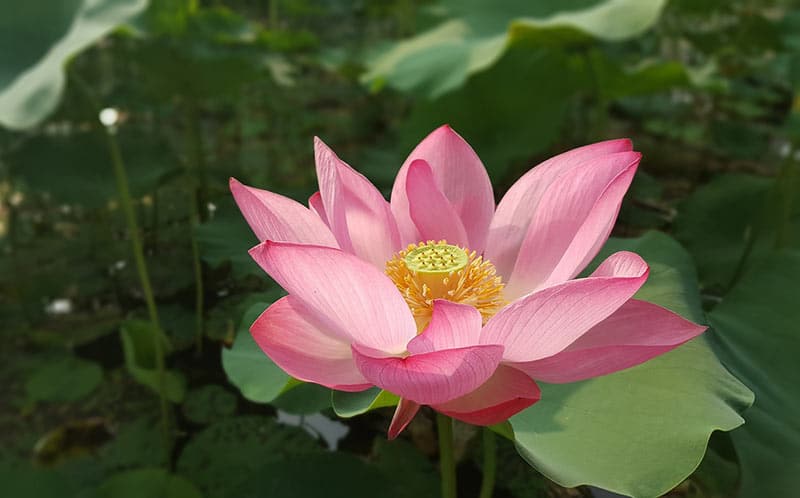 The magnificent blooms of the Lotus are sacred in many cultures, and history steeps it in mythology and folklore. With utmost respect, people refer to this plant as the sacred lotus, as it symbolizes enlightenment, purity, holiness, and faith. 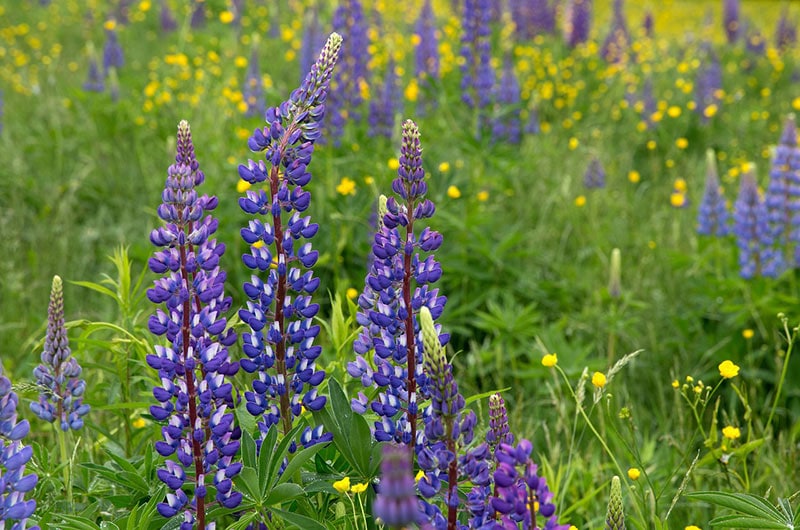 The quaint blooms of the Lupine grow like wings on stiff inflorescences. Also, the Lupine’s unique petals bloom in shades of purple, pink, blue, and yellow. Planting a Lupine to your garden will undoubtedly add a one-of-a-kind look that is sure to catch attention.

The exciting spike of petals of the Lupine plant symbolizes elation, joy, and merriment. 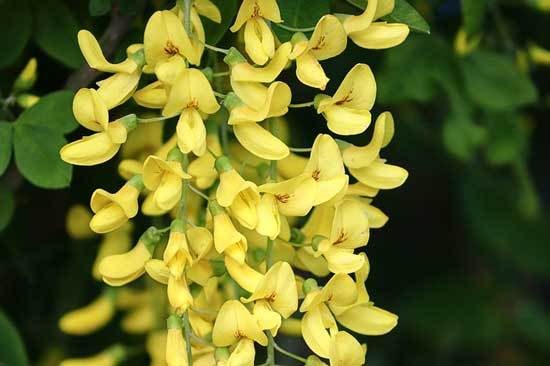 Golden Chain and Golden Rain are popular names of Laburnum, a genus of the pea family called Fabaceae, under subfamily Faboideae. This is native to southern European mountains, which include the Balkans and France.

Laburnum is a deciduous tree that produces leafless racemes of bright yellow pea-like flowers. Each raceme is about 4 inches to 1 foot long. During spring, the tree alone creates a whimsical garden through its widespread and densely packed yellow flowers showering in full bloom.

As far as symbols or meanings are concerned, this flowering tree is associated with pensive beauty and pensive thought as well as forsaken. 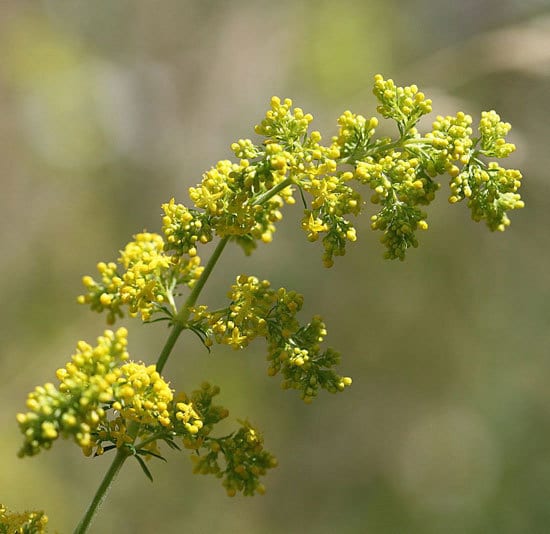 Also known as Yellow Bedstraw or Yellow Spring Bedstraw, Lady's Bedstraw is a herbaceous perennial flowering plant that is included in the Rubiaceaefamily. This is quite famous worldwide as it can be seen through temperate regions of Asia, Turkey, Israel, Africa, Europe, and North Africa with some naturalized in Canada, New Zealand and Tasmania in Australia.

Considered as a weed, this plant grows stems up from 2 feet up to 4 feet. It can easily scramble and grow in a large foliage. The flowers produced are yellow in a dense cluster; hence the name.

The symbolism associated with this flower includes love, rejoicing and ironically rudeness. Based on a Christian legend, this plant is considered as one of the “Cradle Herbs”, which indicates the belief that it’s one of the hays used in the manger where baby Jesus was born. 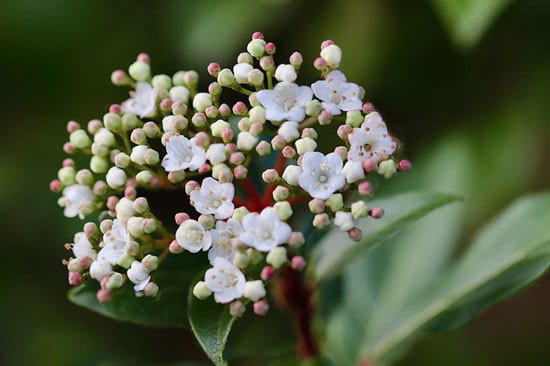 Laurestine or Laurustinus is a flowering plant species in the Adoxaceae family. This is native to the Mideterranean area of North Africa and Europe. It thrives in shady and moist areas.

Considered as a shrub or a small tree, this plant has a large and dense foliage. It can reach from 7 feet and as high as 23 feet with a 10 feet width. Once reached maturity, this grows in a round shape. Its leaves signify Bay Laurel’s leaf. The flowers bloom in rounded cymes, usually in white or light to reddish pink. They are fragrant that can make a garden or yard look more attractive. In addition, these are pentamerous and bisexual. It is categorized as a winter flower since it blooms during that season.

Lady’s Eardrop, which is also commonly known as Fuchsia, is a deciduous perennial shrub. This small evergreen tree is included in the Onagraceae family, and native to South and Central America. There are more than 100 species of this. It is one of the most beautiful and cultivated ornamental plants in the world these days.

What makes this flower very popular is its unique shape and beautiful appearance. Plus, it is easy to grow and display in patios. It is a plant that produces upside down flowers in bicolors, usually red, pink, purple, white but more dominant in fuchsia. They form in a calyx, whether single or double. The sepals are petal-like lobes that are typically in two different colors. They best bloom in shaded areas, which make them a good option to display in homes.

Its name is given based on how the flowers are structured when they bloom. Despite its pink, red and purple colors, this was also named after Leonhart Fuchs, a German botanist. 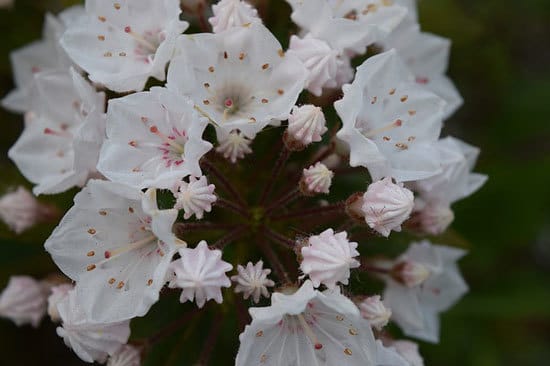 Laurel, otherwise known as Mountain Laurel, is a common universal name for Kalmia. It is also called as American Laurel, Ivy Bush, Calico Bush and Spoonwood. Because it is toxic and dangerous to be taken by animals as well as humans, it is nicknamed as Calf Kill, Lamb Kill, Kill-Kid, Sheep Poison, and Sheep Laurel. This is a genus of evergreen shrubs in the Ericaceae family. It is native to North America and Cuba.

As a perennial flowering evergreen shrub, it grows mostly in dry, sandy and acidic soils. This can reach up to almost 30 feet high. It produces beautiful flowers throughout late spring. It blooms in a round, star-shaped calyx of five conjoined petals. Of all ten species, the flower heads are pink, purple, white and rarely red or maroon.

Its scientific name Kalmia was given after Pehr Kalm, a botanist who collected it in easter part of North America during the 18th century. It symbolizes perseverance and ambition. Based on Arena Flowers, this can be signified as false adulation or treachery. 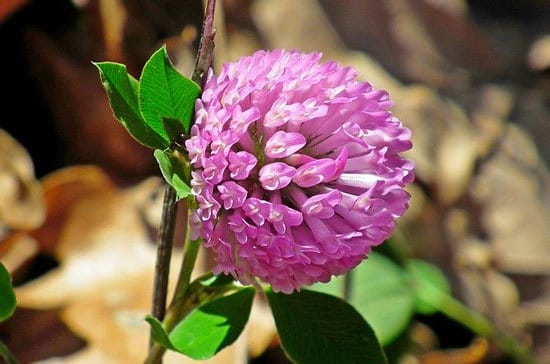 Alfalfa is the most common name of Lucerne, a perennial flowering plant in the Fabaceae family, a legume family. On average, it can live from 4 to 8 years, but some species live up to 20 years long.

Lucerne grows a normal height of 3.3 feet. It thrives in drought-hardy areas with a good climate.

The flowers are formed in short cylindrical or round clusters. They are small and in purple shade. A single cluster consists of 5 to 30 flower heads. It is definitely beautiful to look at, and when they grow from multiple stems, they create a lovely floral foliage. Although purple is the most common color, these also bloom in different shades, such as yellow and white.

The term “alfalfa” was derived in 1845 from the Spanish word “alfalfez”, and Arabic “al-fisfisa”, which means "fresh fodder." Based on Victorian Bazaar, Alfalfa signifies life.

Which of these beautiful flowers that start with L attracted you the most? Share some thoughts and insights regarding these flowering plants.

What Are The Best 5 Lawn Mower Battery In The Market?

What Are The 5 Best Traveling Sprinkler In The Market?