11 Of The Most Subtly Lovely Flowers That Start With K

Some blooms are so striking that you would are immediately astounded by them. Others flowers, although no less attractive, are more subtle. Instead of quickly stunning you with their magnificence, these unique blooms arrest your attention slowly.

Slowly, yet steadily, their rarity and intrinsic beauty captivate you. Then suddenly, seemingly out of nowhere, you’re searching for Knautia blooms or the flowers of Kalm St. Johns Wort to add to your garden. Such is the alluring power of these eleven flowers that start with K. 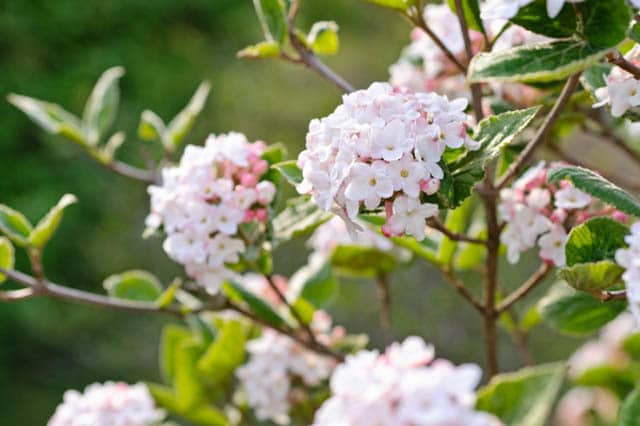 Fluffy snowballs that emit a heady sweet-spicy scent may not be a typicaldescription for a flower, but this is exactly the case for the Koreanspice. This plant’s stunning blooms emerging from distinct red buds is only half of the colorful story. The other half comes out in fall as its foliage turns a vivid red-orange color. With this plant, you’ll always look forward to spring! So be sure place plant where you’ll be able to enjoy its fragrant blossoms thoroughly.

Koreanspice brings to mind the coming of spring bringing new life in colors of pink and white, then in the summer reminds you of life’s brevity as it welcomes fall with blood-red leaves. 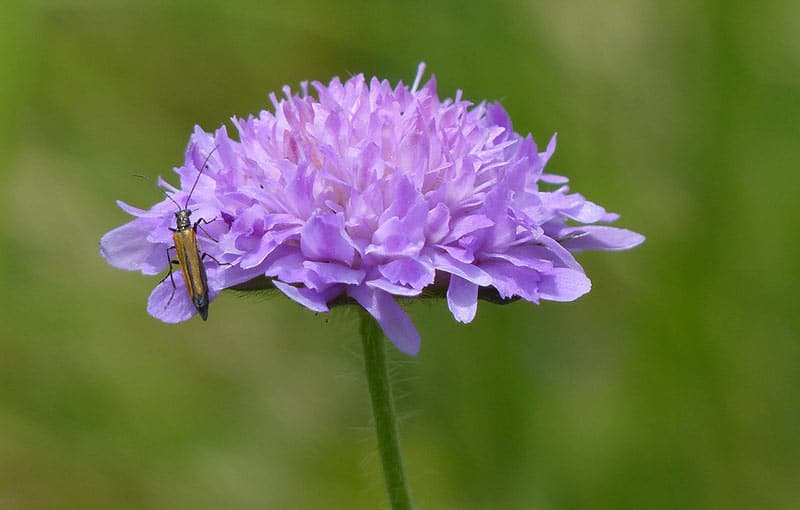 How do you add to something by taking away from it? Well, you can add to theintense scarlet-colored blooms of the Knautia by taking away spent flower heads. The concept of deadheading to promote growth and buds aren’t new to gardeners. This flower, however, may be a refreshing sight as it is rare and uncommon.

The Knautia’s name honors German botanist Christoph Knaut who was born in 1638. The strikingly beautiful flower symbolizes undying love and the beauty in solitude that is tinged with melancholy. 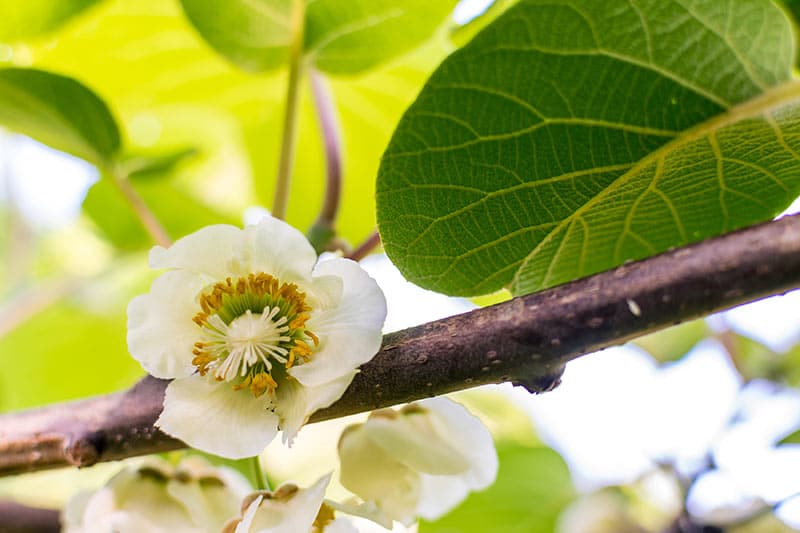 Another fragrant entry on our flowers that start with K is the sweet-smelling blooms of the kiwifruit. Yes, sometimes we enjoy the sweet and delicious fruit that we forget about the blooms! Also difficult to ignore is the kiwifruit’s dark green foliage. It seems like these glossy leaves want all the attention as they typically hide the cream-colored blooms behind them!

The delicate and sometimes secretive blooms of the kiwifruit represent the hidden beauty within and deep happiness as opposed to superficial joy. 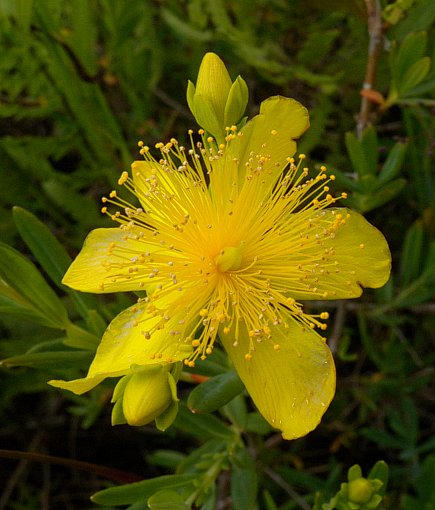 When you look upon the golden blooms of the Kalm St. Johns Wort and find yourself being slowly drawn in by its subtle beauty, then you’re not alone. The flower’s yellow loveliness entrance you as it similarly draws in bees and butterflies to its abundant nectar.

The Kalm St. Johns Wort or Hypericum’s oblong, stalkless, green leaves are a perfect backdrop to its stunning brightly-colored blooms. Those who harvest Hypericum claim that these blossoms symbols protection from danger and misfortune. 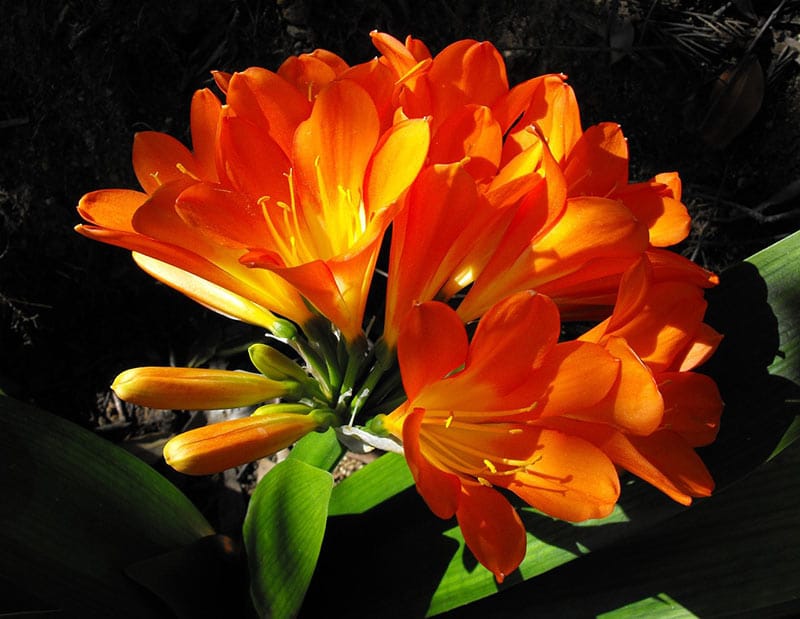 The subtlety of the Kaffir lily, also known as the “Queen of Houseplants,” is admittedly not in its bewitching blooms oforange, yellow and red but it the poison that lies within its foliage. The poisonous substance (Lycorine), may only be an inconvenience in small doses. However, it is very dangerous in large amounts. Remember to keep pets and young hands at a safe distance from this beguiling plant.

The plant’s toxic nature that increases with dosage is an apt symbolism for excess and indulgence, especially in the name of beauty. 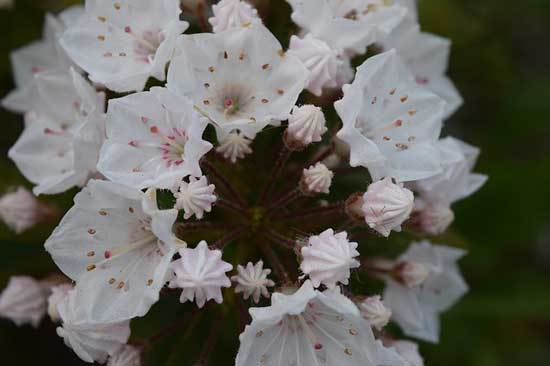 Mountain Laurel is a common universal name for Kalmia. It is also called as American Laurel, Ivy Bush, Calico Bush and Spoonwood. Because it is toxic and dangerous to be taken by animals as well as humans, it is nicknamed as Calf Kill, Lamb Kill, Kill-Kid, Sheep Poison, and Sheep Laurel. This is a genus of evergreen shrubs in the Ericaceae family. It is native to North America and Cuba.

Kalmia, as a perennial flowering evergreen shrub, grows mostly in dry, sandy and acidic soils. This can reach up to almost 30 feet high. It produces beautiful flowers throughout late spring. It blooms in a round, star-shaped calyx of five conjoined petals. Of all ten species, the flower heads are pink, purple, white and rarely red or maroon.

It is named after Pehr Kalm, a botanist who collected it in easter part of North America during the 18th century. It symbolizes perseverance and ambition. Based on Arena Flowers, this can be signified as false adulation or treachery. 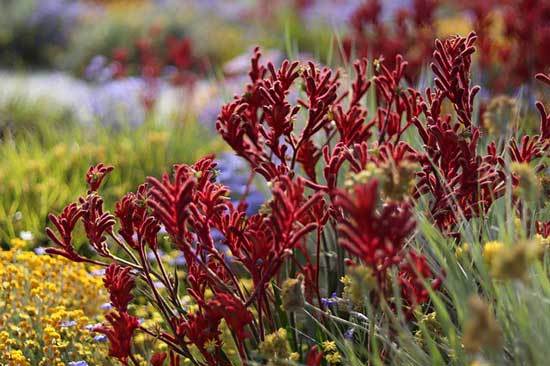 Kangaroo Paw, also known as Kurulbrang, Cat Paw Flower and Mangles Kangaroo Paw, is a plant species originated in the Western Australia. It is for this reason that it’s the floral emblem of the state. Hence, protected under the state’s legislation, which means a license is necessary before anyone can harvest or collect any parts of it from the wild. However, this starts growing in other parts of the country. They mostly thrive in dry, rocky areas with adequate sun exposure.

The flower of this rhizomatous perennial plant has the resemblance to Bird’s Paradise. While blooming, it shows red and green. In its full bloom, the heads are deep red. There are other species that are yellow, pink and black. Its stalks extend up to 4 feet tall. It has no fragrance.

Its name is given as the flowers look like the shape of a kangaroo’s paw. It’s also because of its red color and furry feel.

The term Anigozanthos is derived from the Greek words “anises” or unequal and “anthos” or flower. Therefore, it symbolizes unequal, which may also refer to the irregular and unique shape of the flower. 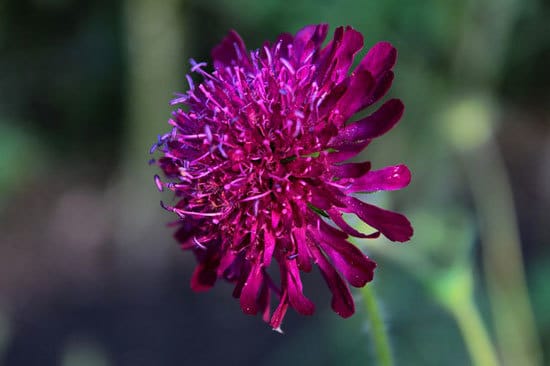 Red Knight is a common nickname of Knautia Macedonica, such as Macedonian Scabious Red Knight and Scabiosa Rumelica Red Knight. This plant’s genus name is given to honor Christoph Knaut, a German botanist and doctor. It also refers to Macedonia.

Knautia Macedonica grows in medium moist, well-drained soil with full sun. It is a short-lived perennial plant that grows short, having an average height of 1.5 feet to 2 feet. 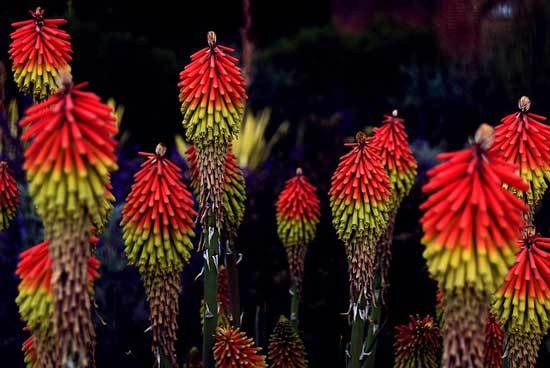 Named after Johann Hieronymus Kniphof, a German botanist and physician, Kniphofia is a plant known by its strikingly beautiful and unique flowers. It goes by a more popular name Red Hot Poker. It is also nicknamed as Torch Lily as its flower heads resemble the shape of a torch. It is native to Africa and belongs to the family Asphodelaceae.

This herbaceous perennial plant can be a beautiful charm to add to any garden since its foliage spreads with a welcoming look. It produces spikes of upright, vibrant torch-like flower heads in bicolor, typically orange-red, red-yellow, and orange-yellow. As it blooms, it produces copious nectars that are often attractive to flying pollinators, which include bees, butterflies, sunbirds and hummingbirds. 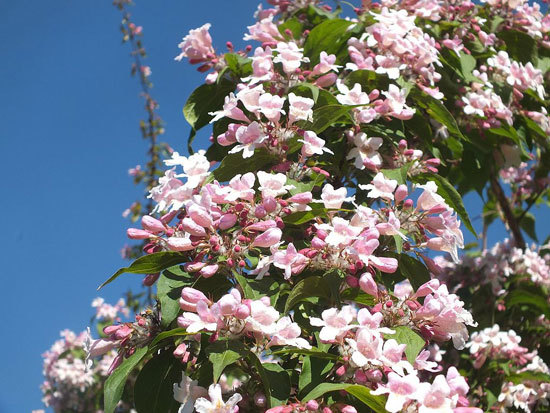 Belonging to the Caprifoliaceae family, Beauty Bush or Kolkwitzia is a deciduous perennial shrub but grown as an ornamental flowering plant. This originated in China, most popularly known as Wei Shi (蝟实). It was named after Richard Kolkwitz, who was a German professor of botany. The epithet “ambalilis” means lovely.

With its arching and spreading foliage, this deciduous perennial shrub can make any garden or yard look more amazing. It reaches up to 10 feet tall and spreads wide as its height. When springtime comes, it produces tubular or bell-shaped flowers in pink, either light or dark, with yellow throats. The bloom, appearing in clusters, covers most of the stems and leaves.

For quick growth and abundant flower production, this should be planted in moist, well-drained soil. It needs a lot of sun and adequate water.

As its name suggests, this flower is a symbol of attractiveness or beauty as well as refinement.

King's Spear is known by other two names, which are Yellow Asphodel and Jacob's Rod. This is native to the northern part of Africa, southeastern Europe, as well as the Caucasus and the Levant. Over the years, it can grow from rocky and stony areas to dry grasslands.

This perennial flowering plant can reach a height of 4 feet with a width of up to 2 feet. It is easily identified by its remarkable bright yellow flowers formed in upright racemes. The flowers have a slight fragrance.

As far as symbols are concerned, this flower is associated with intellectual beauty.

These 11 flowers that start with the letter K are unique in their own botanical structure. Regardless, they can add beauty and luck (for some that believe) in any garden.

What Are The Best 5 Lawn Mower Battery In The Market?

What Are The 5 Best Traveling Sprinkler In The Market?