There are times when gardeners tend to think, “What more can I add to my flower repertoire?” The great thing is, there’s always more to add to your collection of eye-catching foliage! Take a look at these five flowers that start with F! Roses have become a little too common so it’s a good time to add in unique and one of a kind flowering plants that will both challenge and astound you as a gardener!

What’s more, this blooms, if given as gifts, are sure to be memorable! It’s perfect then that we start with the flower of the Forget Me Not. 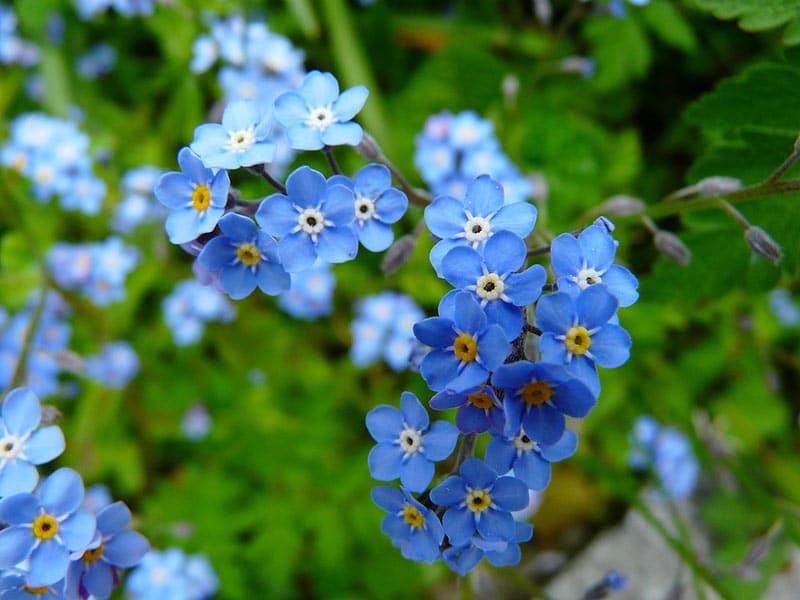 Legend tells of two lover’s walking along the Danube river who chance upon bright blue flowers. The tale takes a turn for tragedy, though, as the man tries to pick some of the blossoms for his lady but is then swept by the river. His last words asked of her to never forget him. Those blue blooms became Forget Me Not.

Legend or reality, Forget Me Nots are a lasting symbol of remembrance, true love that transcends death and time. On the other hand, it can also be a reminder of the people we loved and lost. 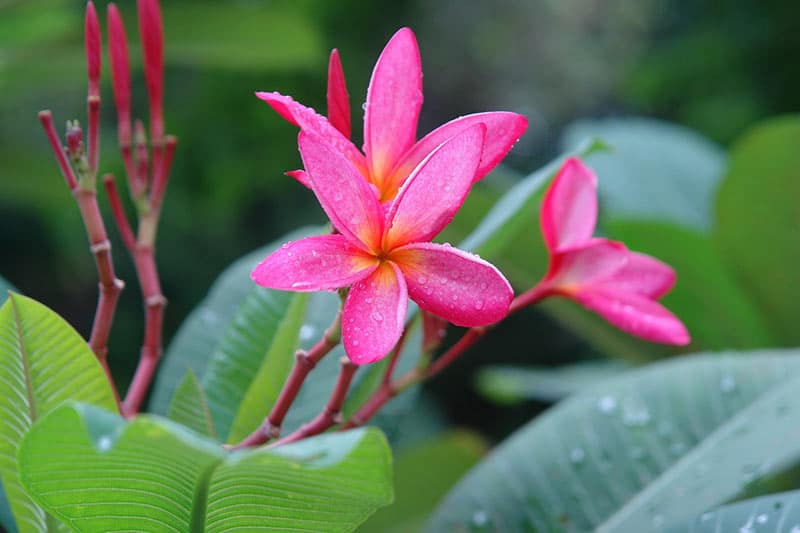 If for some reason, you do no notice the colorful clusters of frangipani flowers, then there very distinct fragrance surely will. This strong odor gave the flowering shrub its name when, in the 16th century, the Marquis de Frangipani invented an early type of perfume. The Marquis used this flower-based perfume to remove the unwanted smells of his leather wardrobe. Hence, the name Frangipani has stuck ever since.

Frangipani flowers represent different things in various cultures. However, many of them connect this fragrant flower with the ideas of strength, lasting bonds, devotion and spiritual fortitude. 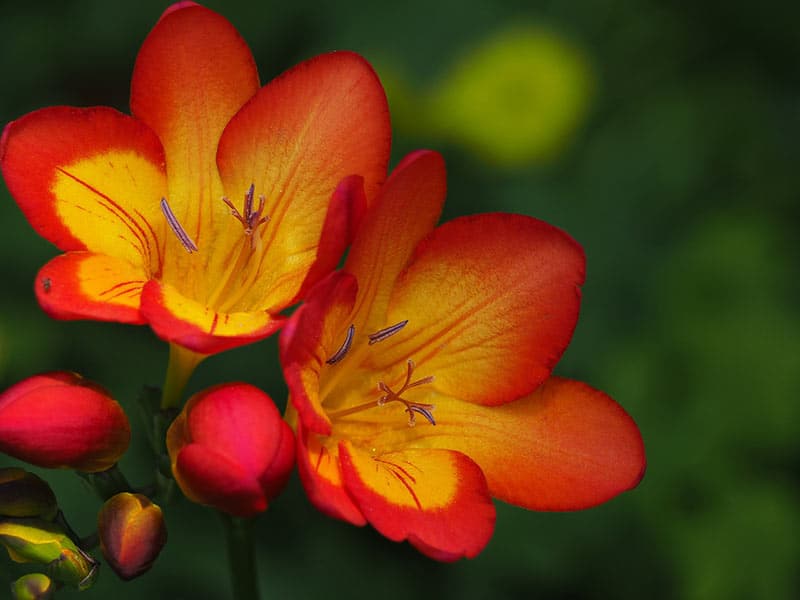 Another sweetly-scented blossom is the freesia’s funnel-shaped flowers. These hardy plants are adaptable to different climates and easy to grow, as long as we drain them well. You can amplify the elegant beauty of the freesia’s blooms by planting established bulbs of different colors! Not only will they bring color, but also an unforgettable citrus scent wherever you put them!

Freesias are a symbol strong friendship, thoughtfulness, and trust. 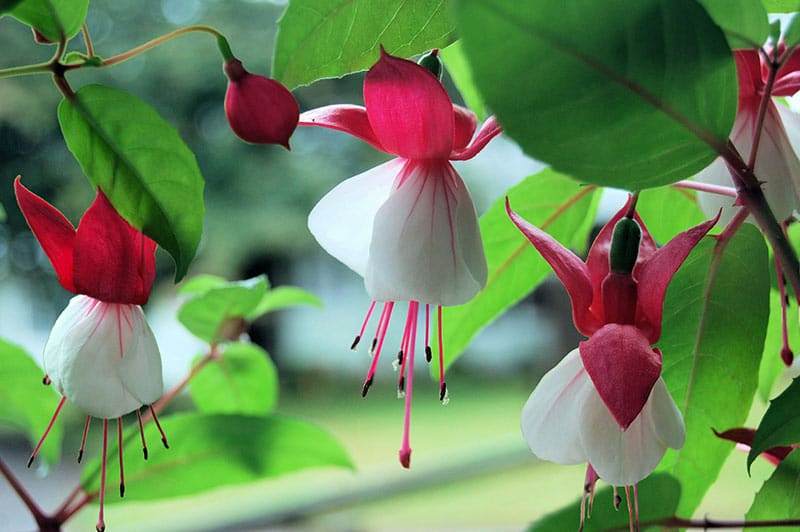 Falling in love with Fuchsias is easy. In addition to their exquisite flowers, fuchsia cultivars are available for most climates. That means you’ll be able to find a variety in almost any country! Once you accomplish the difficult task of selecting your favorite color among the many spectacular blooms, the fuchsia will reward you year after year of gorgeous flowers.

Here’s another look at them: 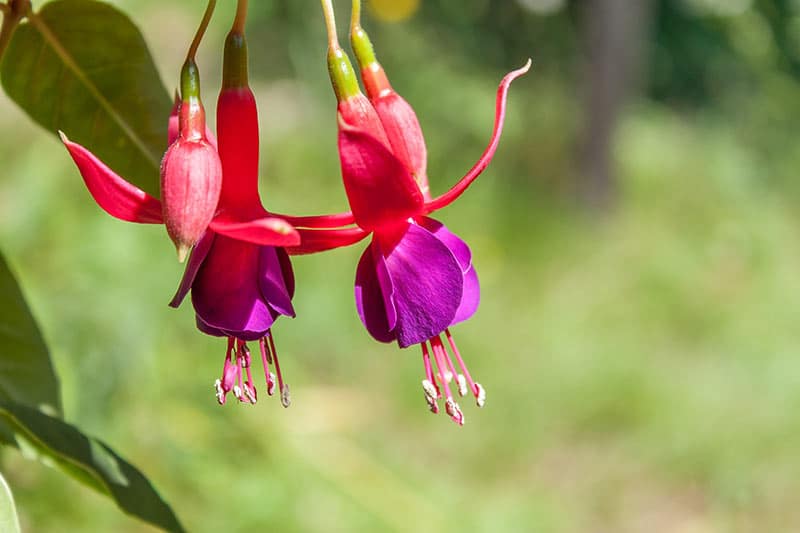 It’s only right then the fuchsias represent unparalleled beauty and abundance. 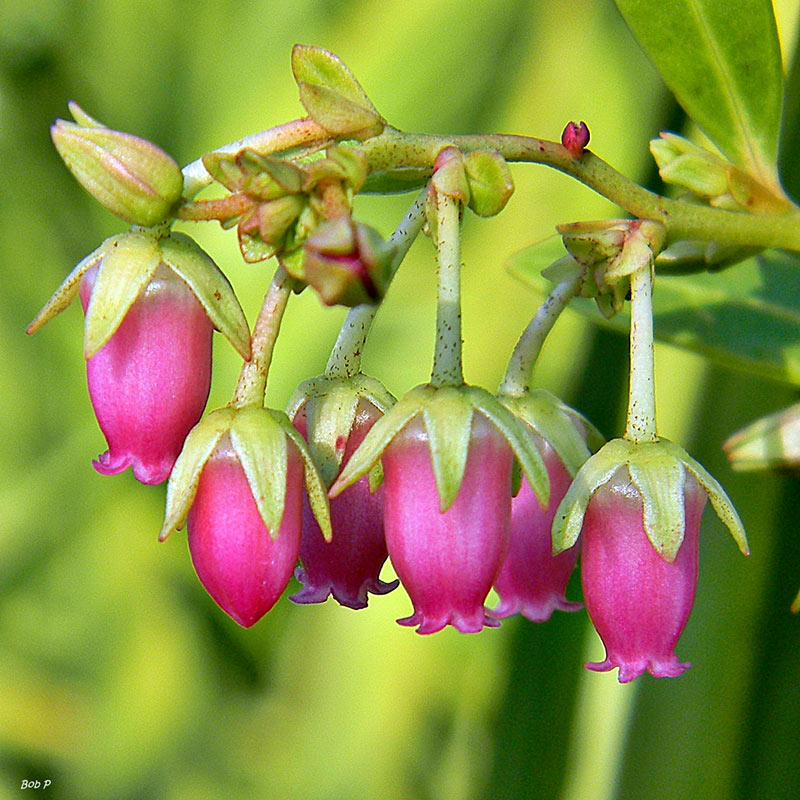 Another addition to the fragrant flowers that start with F is the fetterbush lyonia. This evergreen perennial blooms in sweet-smelling clumps that look similar to small pink bells from a distance.

Due to their sweet nature and dainty appearance, Fetterbush blooms symbolize gentleness, grace, and refinement. 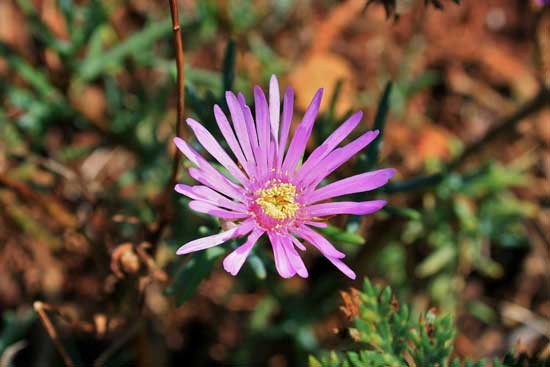 Popular in South Africa, Fig Marigold is a flowering plant belonging to the Aizoaceae family of the genus Lampranthus. It’s a half-hardy evergreen perennial that produces small but beautiful flowers during spring. Other names include Lampranthas, Lampranthus Spectabilis, Sabotengik, Rhapranthes, and Matsubagiku.

Well branched with stems crawling on the ground, Fig Marigold produces asymmetric flowers featuring slender petals with a diameter of 4cm to 6cm. The plant grows small having a maximum height of only 10cm to 30cm (less than 1 foot). While violet is the most common shade, this flower may vary in colors from blue-violet to peach, pink to white, yellow to orange.

Generally, this flower represents passion and elegance. It is considered as a charm, making it a lovely floral gift for special occasions. 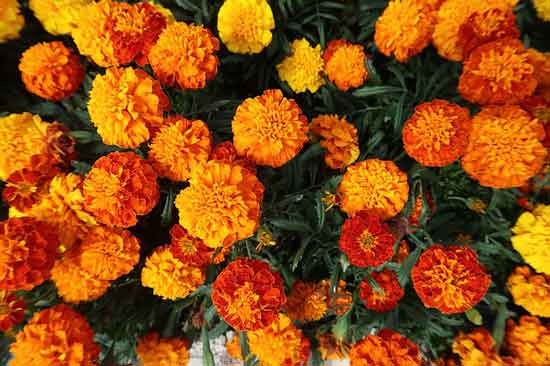 Looking vibrant and welcoming in its natural beauty, French Marigold is a head-turner making a flower enthusiast appreciate its presence. Although small in size, a bed of this flower creates a magnificent and radiant view.

Native to Guatemala and Mexico, this all-American flower can grow in different countries where clay and sandy (moist, well-drained) soil exists. In addition to that, adequate sunlight and good drainage are keys to abundant growth and blossom. What’s amazing about this plant is the fact that it resists cold up to a temperature of -1°C. Therefore, this does not tolerate shaded areas and frost. But 4 to 6 weeks before full exposure, this can be planted indoors and easily develops its first bloom.

The stem fully grows at around 1 foot and produces a single, bright yellow-colored flower head. Other species bloom flowers in multiple colors, usually a blend of yellow, orange and red.

Its name is taken from “Mary’s Gold”, believing that early Christians used and placed flowers rather than coins as offering on Mary’s altar. With its vibrant color, this is connected to the sun. It symbolizes passion, courage or bravery and creativity, as well as jealousy, grief and cruelty. 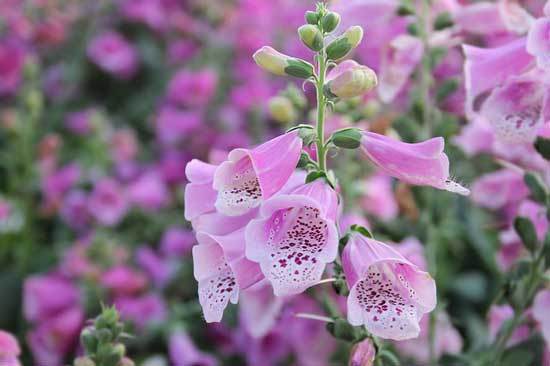 Regardless, this biennial (can also be perennial) plant presents a lovely blossom with its tubular shaped flower head that is typically lavender or purple in color. Other variants produce flowers in yellow, white, pink and red. A single stem consists of a cluster of pretty flowers. This requires full sun during the first blooms, while tolerates partial to full shade if the temperature is too high. Although it blooms in summer, the hotter the weather is the more shade it needs.

This native European plant was first named by the Anglo-Saxon as “foxes glofa” or “the glove of the fox” since its flowers resemble the fingers of a glove. Some nicknames are Fairy Finger, Fairy Thimbles or Bells, Lady Finger, Rabbit’s Flower, Flapdock or Flopdock, Witch’s Glove, Scotch Mercury, Lion’s Mouth, and Dead Man’s Bells.

Foxglove is believed to have both positive and negative symbols. It can heal and hurt as it is associated with folklore, especially fairies, and insecurity. 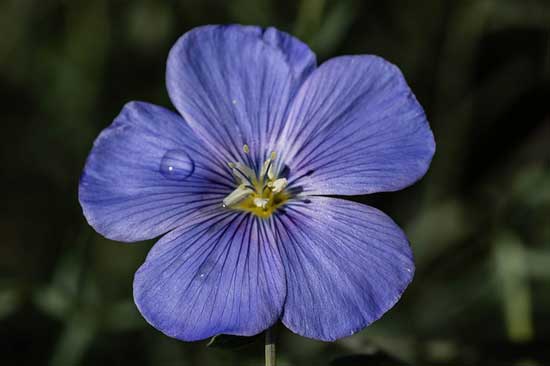 Flax Flowers (Linseed), or often referred to as the Blue Flax Flower, is a native plant to California, and is now one of the common flowers in the US. This is also a national flower of Belarus.

Blossom starts in May and ends in September. It starts growing like a spear and comes out in a cup shape with striking blue-violet flower heads consisting of five petals and yellow-green stamens. The bloom is abundant but only lasts for a day and is replaced on the next day. This process is repeated until the end of summer season.

What this plant requires is poor, barren soil, namely clay, rocky and sandy. Since it needs dry soil, watering is not a major element.

During the Victorian era, this flowering plant was a domestic symbol - representing the domestic setting of life. 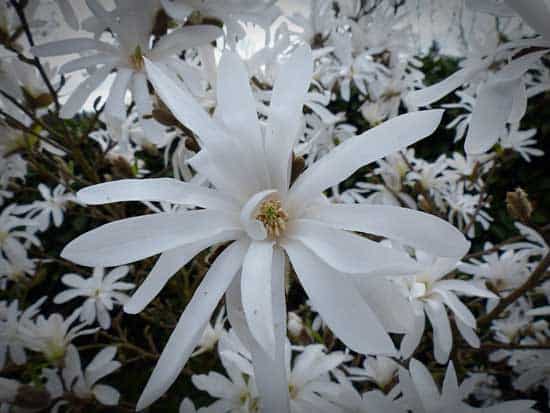 Flannel may not be a familiar flower to many people except for Australians as this is native to Sydney and other areas in New South Wales, as well as Queensland. Although it looks like daisy, it belongs to the Apiaceae family (formerly known as Mackinlayaceae). Its scientific name means “furnished with rays”, which is derived from a Greek stem aktin- that refers to “sunbeam” or “ray”.

This herbaceous shrub matures and grows up to 1.5 feet. It creates a white and silvery foliage. Its daisy-shaped white flower heads and pale grey to silvery stems add soft charm making a garden look whimsical. This features an eight to nine petals with cream to whitish green stamens.

Most of the species grow in sandstone and coastal areas, also basins during spring. Full or partial sun is required for better growth and abundant blooms.

This flower symbolises beauty and strength. It was also selected as a symbol for awareness of mental health problems in 2000; hence, an icon for World Mental Health Day. 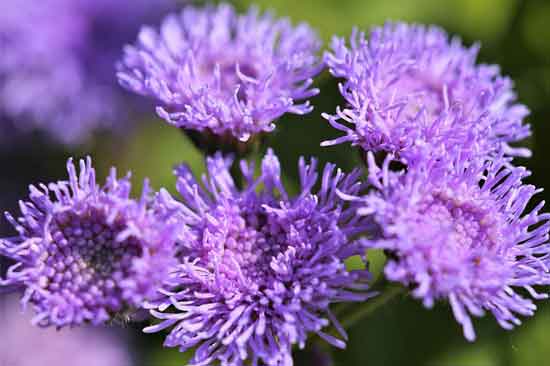 The stunning blue to lavender color of Floss Flower makes an instant attraction to any garden. This native to Mexico plant is otherwise known as Blueweed, Bluemink and Mexican Paintbrush. It’s a cool-season, herbaceous shrub considered as annual and perennial.

Once it reaches its maturity, this plant produces beautiful round, fuzzy, pom pom-like flowers in bluish purple or lavender colors, some are pink and white.

This is tolerant to light shade. Its flowers may start appearing indoors from 6 to 8 weeks before the last frost. It is adaptable in moist, well-drained soil. Even though it can tolerate other types of soil conditions, soggy areas are the exclusion.

Apart from its beautiful appearance, this can be used as a mosquito repellant for other plants.