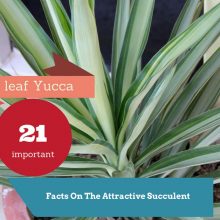 A sought-after succulent, the yucca, adds a very tropical feel and a distinct look to your garden. It’s a sure head-turner with its long foliage like swords and beautiful fountain-like white flowers terminating on a long trunk from its base.

​Pronounced YUK-ah, it is often misunderstood to be the same as yuca (pronounced YOU-kah), the root crop that is otherwise known as cassava. The yucca’s roots are not edible but if you’re ever in need of natural shampoo/soap source, you’ve found one! More on that later.

How to Save a Dying Tree with Guaranteed Success 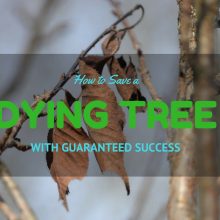 Trees are living things that live, get sick, and will eventually die; just like human beings. However, when a beloved tree begins to deteriorate, you shouldn't lose hope! Let us help you! This article will guide you on how to save a dying tree.

How To Straighten A Tree: 5 Easy Steps 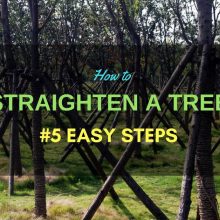 It’s not at all hard to condition a tree to grow straight from the stage of being a sapling. But what about mature established trees? How to straighten a tree If it has grown crooked because of bad rooting or weather conditions?

Additionally, you might wonder if you can still straighten a tree that is growing skew, or is it too late to redirect its growth? Fortunately, you can still help your tree grow straight even though it’s been bent over.
You can also recondition your tree to grow straight despite its propensity to grow skew because of natural causes.

How to Kill A Palm Tree In 4 Easy Ways!
Best Rope for Pulling Trees! Here Are 5 Best!!
How To Keep Birds From Eating Grass Seeds In 7 Easy Ways
How to Grow Moss Indoors: 5 Easy Steps to Follow
Gardening in Arizona – 10 Ultimate Tips for The Beginners
Want To Know How To Grow Broccoli Indoors? 4 Things To Know
We use cookies to ensure that we give you the best experience on our website. If you continue to use this site we will assume that you are happy with it.Ok