Where Can You Find Best Insecticide for Roses? (Read on to find it)

Roses are considered as flowers of love. Their aroma, beauty, and elegance make them the perfect choices for expressing your love and emotions. Unfortunately, like any other plant, they require to be protected from pests. A strenuously growing rose is likely to survive from the pests when compared to a strained rose. Now let’s have a look at the best insecticides for roses.

Pests Which Are More Prone to Attack Roses

There are various types of Aphids that feed on roses. Aphids have sharp mouthparts that they use it for piercing and sucking the plant’s sap. Although smaller population of Aphids doesn’t cause much damage to roses, their high reproduction rate allows them to quickly reach the numbers that are sufficient to harm the roses. 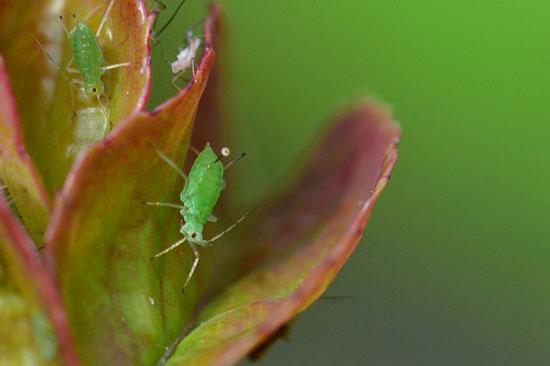 Roses suffer from a stunted growth due to their feeding characteristics. If the infestation is heavy enough, it could also reduce the bloom concentration of the roses. Moreover, Aphids excrete honeydew when they feed on roses. Honeydew further attracts ants and wasps where it promotes the growth of fungi on leaves of the roses.

Aphids can easily be controlled by spraying a strong stream of water on roses or spraying insecticide on the leaves. However, they are very difficult to exterminate since their reproduction rate is very high.

Beetles are known to feed on flower buds of the roses. It is also possible for them to feed on leaves. They are very stealthy and feed only during night time. This makes it difficult for the gardener to spot them. 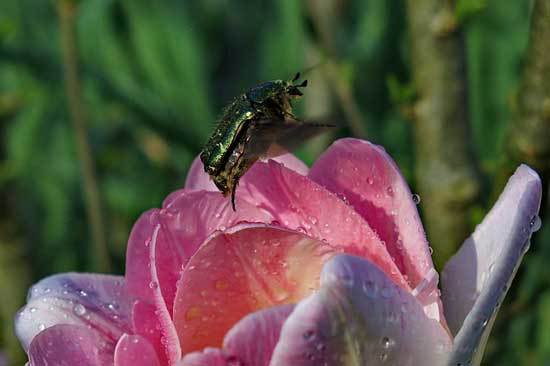 Beetles have a short lifespan of around 30 days. They have strong mouthparts which are used to feed on various species of plants. When a plant is fed by beetles, they cause torn sides and holes on petals while leaves of the plant are skeletonized. Sometimes the entire flower is eaten by the beetles.

They can easily be exterminated by handpicking and placing them in insecticide solutions.

Mites are extremely small in size and they are difficult to be seen without a magnifying glass. They also have piercing mouth parts that they use to feed on plant sap. After they feed on leaves, a white speckling takes place on the upper surface. Fine webbing also gradually develops on the leaves and further harm causes them to fall. Furthermore, dust particles are accumulated due to webbing on leaves. 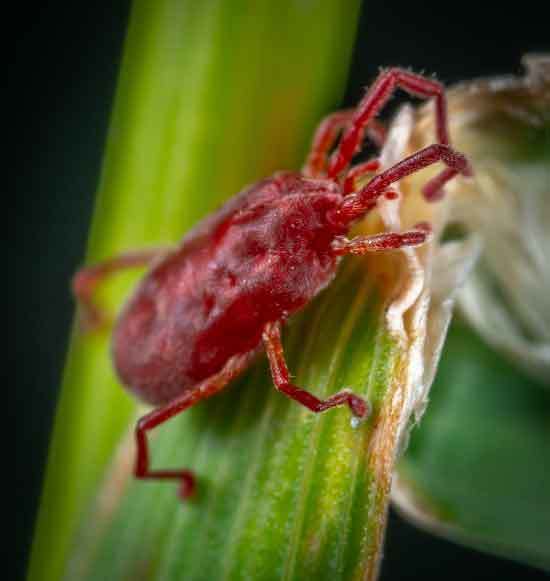 Spraying water and applying insecticidal soap on the lower portion of the leaves is recommended for preventing against mites.

They are found on rose canes mostly where they use their mouthparts to feed on plant sap. As the infestation becomes heavier, twig dieback occurs in rose canes. 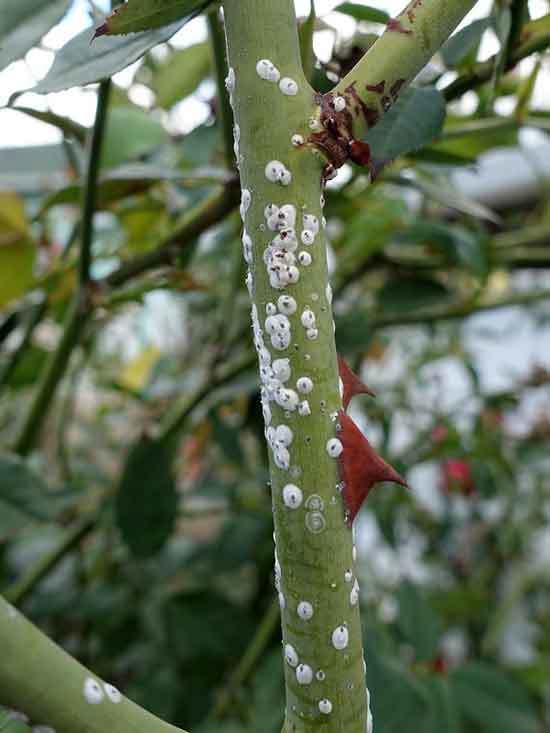 Rose scales are naturally controlled by ladybugs and parasitic wasps. They can also be removed from the leaves by hands. However, insecticides are not recommended for prevention as it causes harm to their enemies.

Insecticides have played a vital role in preventing our plants and crops from vector-borne diseases. Since the date they were synthesized, they have been serving mankind with their battle against diseases. However, they do come with some consequences despite the fact that they are so efficient in protecting us. As a result, pesticides are chemicals like any other chemical substance and they do pose a threat to our environment when they are used in large quantities.

Insecticides cause toxicity in food, water, air and even in the soil. They are also responsible for killing non-target organisms which are considered beneficial for our environment. Furthermore, pests have developed resistance towards insecticides throughout the years. This causes more insecticides use on plants which leads to more pollution of our environment.

Insecticides are also responsible for interfering with food-chain by eliminating essential food sources. Around 72 million birds are killed every year due to the extensive use of insecticides.

Among the human being, children are more prone to the harmful effects of insecticide since they have a relatively weaker immune system compared to the adults. Exposure to insecticides can cause various harmful diseases. A harmful insecticide, which is known as DDT, was banned because of this reason. It was responsible for mutating somatic cells, which caused leukemia and breast cancer.

Although strict policies are being enforced about the use of insecticides, we have become so dependent on them. For this reason, it is not possible to stop their use completely. However, it is necessary to limit their use and also to improve their quality. As anything else, they may become toxic if they are used extensively. 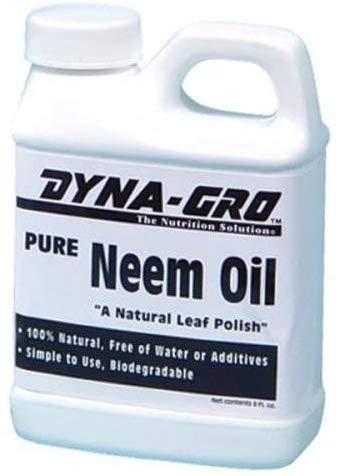 It is a great multi-purpose bug killer. It is perfect against mites, mildews, etc. Mites are one of the most harmful pests for roses and they can easily be eliminated by using this pesticide. The most important feature of this product is that it is natural and can be applied at any stage of a pest’s life. For greater efficiency, this product should be used in early spring, right before the pests attack your roses. It has a size of 8 oz. It also causes leaves to shine after it is used. Furthermore, it does not cause clogging of stomata, like other heavy pesticides.

It is one of the most long-lasting insecticide available to buy. It contains a chemical toxic known as Cypermethrin. About 32 gallons of insecticide can be prepared by this product. It helps to protect from many different kinds of pests such as subterranean and formosan.

It can exterminate around 20 pests and helps to prevent many harmful insects to come inside the house. It is highly powerful so that it can even kill dragonflies and spiders. Moreover, it can also be used for killing black-widow, fleas, roaches, fire ants and many other insects and organisms which may pose a fatal threat. An interesting feature of this product is that it is claimed to be controlling pests, even ten years after it is used. 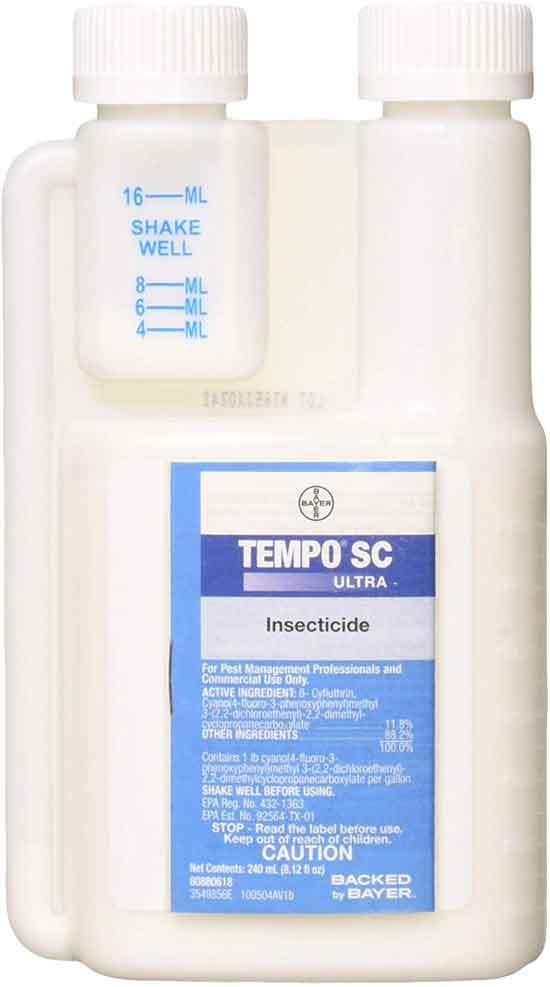 It is a no odor and non-staining insecticide that can make up to 30 gallons. It is very long-lasting and can be used both indoors and outdoors. It is effective against a variety of bugs and insects such as spiders, aphids, ticks, armyworms, fungus, beetles, etc. It consists of cyfluthrin chemical which is around 11.8% of total concentration. It has a very low toxicity level so that it is suitable for home use as well.

It weighs around 2.2 pounds and is manufactured by a company called 'Bayer'. It acts very fast in knocking down the insects and is also very fast-acting compared to other insecticides. 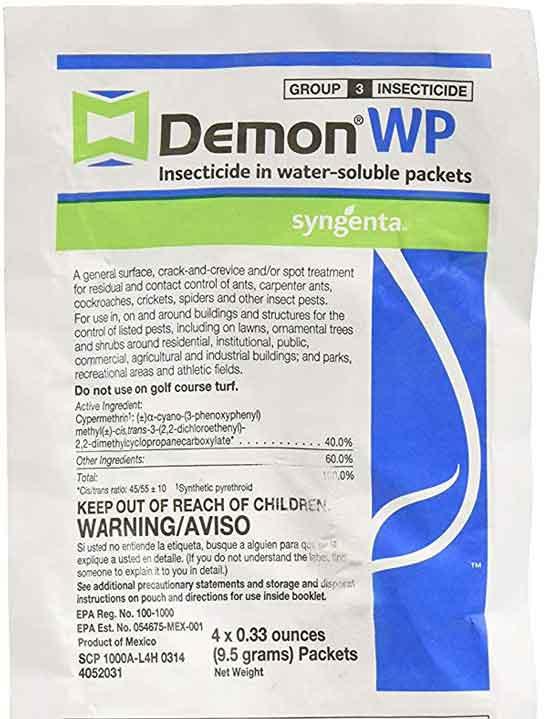 It is a great insecticide to be used in cracks and crevices. It can be applied over hard reaching places. It is possible to use it commercially and personally. Both indoor and outdoor application of this product is possible. It is manufactured by Syngenta. 1 to 2 packets per gallon of water is enough for getting this product ready by mixing it. 1 envelope contains four 9.5 grams of water-soluble capsules. It can be used to target a variety of pests efficiently. It can dissolve very quickly in water and can be used as a suspension solution. 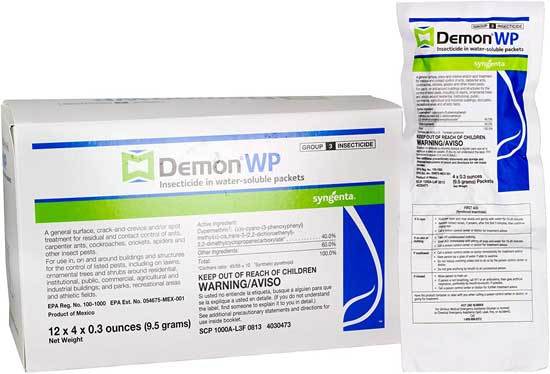 The active ingredient used in this product is cypermethrin. It has a yield of one envelope. Each envelope contains 4 water-soluble packets and provides 2-4 gallons of solution. It can target a variety of pests. It could be harmful to children. For a better impact, it should be left for 30 minutes after it is applied. It is also helpful in exterminating variety of bees.

After it's applied, it leaves a white powdery film, which is most noticeable in dark surfaces. It weighs around 1.6 ounces per packet. In addition, the use of this product is also suitable for industrial buildings.

Considering the features of the insecticides mentioned above, Dyna-Gro NEM- 008 Neem Oil is the outstanding one.

It is very efficient in exterminating various kinds of insects. As compared to other pesticides, it is natural and less harmful. Moreover, it effectively can be used for specifically targeting pests that cause harm to roses.

Although the other pesticides come with various kinds of risk, this pesticide doesn’t have a fatal risks associated with it.

The best thing about this product is that it does not cause any kind of pollution. It also has a very sweet-smelling aroma while other pesticides come with an unpleasant smell that can last very long.

What Flowers to Give on Your Anniversary?
How To Start A Flower Garden In 12 Steps?
A Complete Guide On How To Use A Landscape Rake?
How Much Oil Does A Push Mower Take To Prevent Damaging The Engine?
5 Best Snake Repellent Reviews For 2021
5 Best Hose End Sprayer Reviews – (Buying Guide 2021)